As the weekend crowd flocked in they were greeted by weather meticulously put together for savouring an excellent day of cricket. The prospect of the Indians batting most of the day predictably drove the Indian diaspora into the stands from far and wide across England. Trains chugged into the Nottingham station, unloading hordes of men, women and children, a generous proportion Indians, and the path to the ground was a continuous flow of cricket lovers with their sun hats and backpacks.

Unfortunately for the Indian fans, the action in the middle failed to match the brightness of the elements. It was perhaps the most frustrating session they had ever sat through. Jimmy Anderson started with a fancy on-drive in the first over from Bhuvneshwar Kumar, carrying on with the same inspiration which had touched his batting on the previous afternoon. He followed it up with a roaring square drive in Kumar’s next over. There was a huge scything haymaker of a stroke that evoked gasps around the ground, and a stern look from Joe Root. An inside edge allowed him to get away with his indiscretion.

Ishant Sharma struck him on the glove, but Anderson carried on. Anderson squeezed him past gully for a brace. The next ball took a while with some gamesmanship all around, the batsman pulled away and the bowler stopped on his way. Anderson got firmly behind the short ball.

Joe Root drove Kumar past cover for two to notch up a new partnership record for England against India, going past the 32 year old mark set by Paul Allot and Bob Willis. Both the teams had bettered their last wicket partnership records against each other. But the tale of the last man was not over yet.

Root unfurled a flurry of exquisite strokes without any run, the balls travelling handsomely to the fielders patrolling the distant boundaries, and the young batsman ascetically refusing the singles. When the field was brought up, the ball was streakily cut away for four. The deficit looked distinctly less intimidating with every passing over. Root was into the 90s.

Mohammed Shami replaced Kumar. With the field brought in for the last two balls, he unleashed an impeccable cover drive to move to 97. The following ball was driven squarer and the hundred was brought up with panache. It had been an innings which progressed from initial tentative edginess to sure solidity and finally ventured into the realm of ease and flowing grace.

Anderson enjoyed the moment. Ishant bounced him with a number of fielders around the bat and he swatted it over the slips for four. When the bowler pitched up, the No 11 pierced the covers with a cover drive of unusual class. He was into his 40s and the deficit was just 61.

In the following over, Root drove through the covers for a brace to bring up the hundred of the partnership in just 139 balls. Anderson followed it by tickling one to the fine boundary to bring up the 400. The next ball was played to gully and Murali Vijay failed to hold on to a low chance.

Six catching men circled Anderson as Ishant ran in, three on each side, almost symmetrical, profoundly unusual. The balls were short, on the body. The only way Anderson came close to being dismissed with this line of attack was when he rushed out for a near suicidal single to point.

Shami ran in with the similar curious circular field enhanced further, nine men crouched between short mid-on to short cover, MS Dhoni directing operations from the middle of the close catching crowd. Anderson charged out and hoiked one over the cow corner for a boundary to reach his first half-century. The ovation was louder than any heard so far, way higher on the decibel scale than one heard when Root reached his fantastic hundred. It was Anderson’s first half-century in any form of cricket.

Jadeja was introduced after 11 overs. Anderson brought out the reverse sweep and managed to squeeze a boundary between wicketkeeper and slip. In the next Jadeja over, he played a sweep of the conventional variety for four.

Shami persisted with his folding umbrella sort of field to Anderson. The batsman slapped one past point for four.

Ishant, beard, hair and all, changed over to the Radcliffe Road end and ran in with renewed resolve. Root chopped one down to slip, was beaten outside off, but the wicket remained intact. The field closed in the form of the umbrella as Anderson faced. The pitch was sluggish enough to spare Anderson the trouble of getting on his toes to tap down the short ones. With a couple of balls swinging past Root’s bat, it was rather surprising that the Indians had not deviated from the short stuff to Anderson. The short pitched stuff is not really difficult to play on this slow wicket, especially if the field eloquently screams out the plans. Hardly a delivery tested Anderson’s front foot play all morning.

As a variation, Murali Vijay was introduced to send down some off-breaks. Anderson lofted him straight down the ground for four. England now had the lead.

Root strangely continued to turn down singles and farm the strike. Surely a man batting on 69 does not need to be shielded. Had all the runs been taken, Root would have probably been nearing his double hundred and England sitting on top with a sizable lead.

It was curious cricket all around, and did not really make for entertainment for the spectators.It has to go down as one of the most frustrating sessions for the Indian supporters.

With the extended session opted for, Root pushed Jadeja to long on and ran a single to set the new world record for tenth wicket partnership. It had been a curious match so far.

Stewart Binny came in with his  mill medium pace and was driven through the on side for four by Anderson, and through the covers by Root. The Indian contingent in the press box was growing restless. The impeccable etiquette displayed on the first three days were giving way to a couple of expletives. The mind boggles wondering about their counterparts in the stands. The absence of Ravichandran Ashwin was growing more and more apparent every minute.

Never did a lunch break arrive with a greater sense of joy and relief for the Indian fans, but not before Anderson had moved into the 80s with an edged drive through the gully. The partnership was now on 187, the total 485, the lead 28, Root immovable on 143.

The sessions after lunch have produced a bagful of wickets on each of the previous days. It is not good news for India. 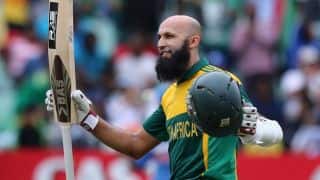 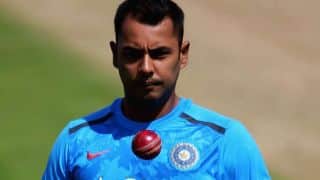