Gavaskar said he found Indian skipper Dhoni the only one fighting for the country.

Indian batting legend Sunil Gavaskar questioned the work ethics of some of the Indian cricketers following team’s awful and dejecting show in England. Gavaskar did not take names but felt that some players were not putting in enough number of hours in the nets to overcome their shortcomings.

Indian batsmen struggled to cope with the seam bowling in English conditions and had it not been some timely contribution from the lower-order the team would have been in a more pathetic situation.

“Questions will be asked. Because of the love for the game, people, fans can question what’s going on in the team. It’s fans who spend their hard-earned money to watch the team play. Work ethics [followed] under Gary Kirsten (former India coach) is not the same now,” Gavaskar told NDTV.

“Who to point out [for this] is something which can be looked at. There are some players in the side who may not need much practice but there are others, who need more practice,” the former opener said.

Asked if he feels Mahendra Singh Dhoni cares for Test cricket, Gavaskar said he found Indian skipper the only one fighting for the country.

“He curbed his natural instinct and scored runs. Had he not scored, the side would have been out for under 100. There were some others who were just pushing. When you are playing 10 innings and you keep on repeating the mistakes of your second and third innings, it means you need to improve.”

“The way he [Dhoni] fought, he gave impression that he was fighting for the country. Effort level has to be seen. India can accept that the other team is better but how can we accept not to fight and giving up. In one session you are losing 6-7 wickets in the last three Tests, it needs to be looked at,” he said.

Gavaskar said Test cricket required different approach than One-dayers and those who cannot cope with it should not play Test cricket. “In limited overs, the focus is on stopping runs. You can get away with edges. In test cricket, the ball will come to your ribs. It’s easier to score runs in ODIs. If you are not going to do it in Test cricket, you should focus on something else,” he said.

Asked who he was referring to, Gavaskar said he won’t take names. “Everybody saw it, I will not name individuals.”

Former India batsman VVS Laxman also vouched for Dhoni’s interest in Test cricket. “He does care. If the team do not respond to the challenge what a captain can do,” he asked. 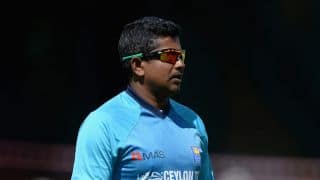