With an aim to bury the ghosts of a disastrous tour of 2011, a new-look Indian cricket team would be eyeing a positive start to their two-and-a-half-month long tour of England when they take on Leicestershire in a three-day practice game.

The visitors, led by skipper MS Dhoni, reached London last weekend ahead of what will be a gruelling tour, including five back-to-back Tests, five One-Day Internationals (ODIs) and one Twenty20 International (T20I).

India failed to register a single win in their last tour having lost the Test series 0-4, the five-match ODI series 0-3 and also the lone T20I.

India suffered the humiliation last time in 2011 despite being equipped with seasoned campaigners like Sachin Tendulkar, Rahul Dravid, VVS Laxman, Virender Sehwag, Gautam Gambhir and, of course, skipper Dhoni himself.

But with all of them missing this time, the onus will be on youngsters like Virat Kohli and Cheteshwar Pujara to hold fort.

Team India sneaked into the country almost unnoticed with most people either mesmerised by the ongoing FIFA World Cup in Brazil despite England’s poor showing there, or pre-occupied with their cricket team’s first-ever home series loss to Sri Lanka.

England’s series loss to Sri Lanka bodes well for Dhoni and his young squad and the hosts will be low on confidence going into the series.

While the usual noise accompanying an Indian team is missing, this team will not be devoid of eyeballs once they take the field against Leicestershire on Thursday.

The bigger comparison to the previous tour though lies in this well-planned run-in to the first Test at Nottingham on July 9. Not only do they practice here, but the Indians will also play Derbyshire in another three-day practice match (July 1-3) before finally heading to Trent Bridge.

That means India will spend a fortnight in England before they turn their attention to the first Test.

Additionally, a majority players of this squad have been give time off after Indian Premier League 7 (IPL) and they will be well rested after a long season that included tours to South Africa and New Zealand.

The common thread between those two tours was India’s inability to win a single Test match as also the fact that they were very short trips, allowing very few opportunities to change combinations.

With two practice matches to start off a five-Test tour, the Indian team management will have six days of cricket as evidence when picking their eleven form first Test in Nottingham.

India did not have this luxury against either the Proteas or the Kiwis. And the Dhoni-led side need to grab this chance with both hands primarily because this squad is severely lacking in experience of playing in English conditions.

With Zaheer Khan missing out on selection, Dhoni, Gautam Gambhir and Ishant Sharma are the only ones in the 18-member squad to have experienced Test cricket in this country.

There is a big question-mark regarding the composition of the bowling attack. With six medium pacers (plus Stuart Binny) and two spinners in the mix, it will be interesting to see which players get time in the middle in this first tour game.

The playing eleven for the tour game will reveal key pointers to the bowling composition the Indian think-tank might be contemplating for the first Test.

At the same time, the Indian batsmen need to make full use of the practice match and get quickly accustomed to the conditions that are totally differrnt to the flat-tracks back home.

The line-up that takes strike against Leicestershire will also provide a look at where Gambhir fits into the scheme of things.

The left-hander returns to the national side after spending nearly one and half years in the domestic wilderness, even as Shikhar Dhawan and Murali Vijay continue to be the first-choice opening combination in the longer format of the game.

It should be noted here that Binny also doubles up as the only back-up batsman available to the side, and going ahead, one of the three openers might have to adjust lower down the order should the need arise.

But it remains to be seen whether Dhoni pre-empt that situation and give an outing to all three batsmen.

Meanwhile, for Leicestershire, it will be a break from the hammering they are currently receiving in the County Championship, placed last in the division-two points’ table.

At best, this is a chance for them to attract fans during the three days, as the T20 tour game versus India in 2011 at the same ground proved to be quite popular. 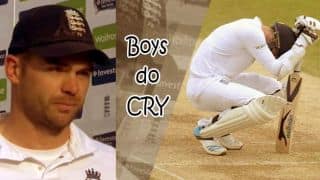