India are 64 for one in 9.1 overs in the third One-Day International (ODI) against New Zealand at Auckland. Rohit Sharma is batting on 36. Shikhar Dhawan was out for 28.

Rohit charged to Mitchell McClenaghan again and smashed him for six over his head. When he pitched it short, he pulled it over square for a six.

Dhawan too got his first six off Southee as he charged and smashed straight down the ground. Hamish Bennett was welcomed into the attack with a six by Rohit over long on.

And then, he was flicked through fine-leg for a four.

Dhawan then went after Southee again and carted two fours through the off-side. Corey Anderson was brought into the attack in the 10th over and he struck with his first ball as he pulled it to square-leg. 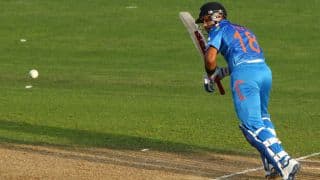