Virat Kohli remains India's hope at stumps on Day Two of the second Test at Centurion.

India rattled South Africa below 350 at Centurion, but conceded the momentum reeling at 183 for 5 at stumps. Virat Kohli lost Murali Vijay, Rohit Sharma and Parthiv Patel in the evening session, and will look forward to the lower order’s contribution to bail the side tomorrow. Kohli remains India’s hope with an unbeaten 85*.

India resumed the session at 80 for 2. Vijay and Kohli looked in full control on a surface which offered nothing significant to the bowlers. While Kohli leaned forward for his drives and defensive strokes, Vijay was more content playing within the crease. Just when the partnership was surging, Vijay went into a shell at 46. That led to a lapse in concentration. Vijay played a cut and edged one to the wicketkeeper off Keshav Maharaj.

Rohit came at No. 5. There have been numerous debates regarding his selection ahead of Ajinkya Rahane. While many believed Rohit would follow his captain’s mantra of showing intent, the limited-overs specialist failed to get going. He fell prey to an inswinging delivery and got trapped lbw for 10. His dismissal was similar to his first innings departure at Cape Town.

Kohli continued to pile runs at will and displayed confidence playing forward. He was adamant not to poke anything outside off stump and rotated the strike. In addition, his verbal spat with Kagiso Rabada injected drama and kept both players on their toes.

Against the run of play, Kohli survived a close call off debutant Lungisani Ngidi. He needlessly shuffled across for a flick to get a faint edge.

Parthiv Patel came at No. 6. He, along with Kohli, kept the scoreboard moving amidst a good spell from Rabada and Ngidi. Parthiv timed his strokes and took on the spinner occasionally. He was comfortable against the pitched-up deliveries, but perished off a back-of-length ball. Parthiv became Ngidi’s maiden scalp.

The day’s play ended with Hardik Pandya and Kohli, two epitome of intent, at the crease. India still trail South Africa by 152 runs.

While Kohli looks settled for a big one, he needs company. Pandya would have to negate any threat in the first hour of Day Three and consolidate from thereon.

Remember, there is no Bhuvneshwar Kumar who played second most deliveries (127) at Cape Town. 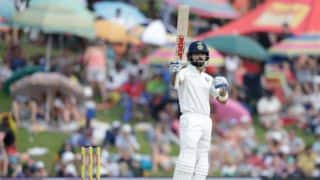 India will come back strong against South Africa: Romesh Kaluwitharana