Pakistan's next Test series is against West Indies and with the way the limited-overs series has gone by between both teams, they will like to claim the position again from India.

India have become the No. 1 Test team in the latest ICC Test rankings after winning the second of the three-Test series against New Zealand. India won the first Test by 197 runs and maintained momentum to come on top of the visitors in the second Test at Eden Gardens, Kolkata and thereby removed Pakistan from the numero uno position rankings. Winning the toss, Virat Kohli elected to bat and India made 316 with fighting half-centuries by Cheteshwar Pujara, Ajinkya Rahane and Wriddhiman Saha. New Zealand lost the plot with a paltry 204 runs giving the hosts a 112-run lead. Posting 263 in the second innings, India gave New Zealand a daunting target of 376 but Kiwis succumbed to a 178 run-defeat. India’s will play the last Test at Indore from October 8. FULL CRICKET SCORECARD: India vs New Zealand, 2nd Test at Eden Gardens, Kolkata

India were declared the top spot in Tests after winning the third of the four-Test series in their tour to the Caribbean island but with the last Test ending in a tame draw, due to rain, cost them the coveted position. Pakistan, on the other hand, played an intense series in their tour to England to draw the four-Test series 2-2. Trailing 1-2 before the final Test, Pakistan won the fourth Test courtesy a magnificent double century by veteran Younis Khan. In this process, they removed India to claim the No. 1 slot with a one point lead. ALSO READ: India may pull out of Champions Trophy 2017, says Anurag Thakur

India will like to whitewash the series and consolidate their position in the top spot with arch-rivals, Pakistan breathing down their neck with not much difference in points tally. Pakistan’s next Test series is against West Indies and with the way the limited-overs series has gone by, they will like to reclaim the position again. 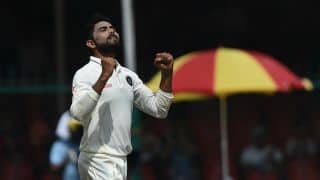