The unbeaten Under-19 Indian side will be high on confidence when they take on a resolute Bangladesh Under-19 outfit in the tri-series final.

Kolkata: The unbeaten Under-19 Indian side will be high on confidence when they take on a resolute Bangladesh Under-19 outfit in the tri-series final at the Jadavpur University ground on Sunday. Afghanistan, the other team in the competition, have been knocked out as they failed to win a single match. Bangladesh will be aware of the fact that they will have to be at their very best in the final if they are to clinch it against the mighty hosts. A win here would boost the confidence of both the outfits before the Under-19 World Cup in Bangladesh in 2016. India-Pakistan series to honour Ajmal Kasab: Shiv Sena

India have been superb throughout the four matches they have played, winning every single one quite convincingly. Their strength has been their batting which has been backed up by some disciplined bowling performances. The Rahul Dravid coached side has had a strong show from the top order. Wicketkeeper-batsman Rishabh Pant has led from the front with a few dominating batting displays which includes an innings of 118 runs in the last encounter against Afghanistan. Washington Sundar and skipper Ricky Bhui have been amongst the runs as well. Laxmi Ratan Shukla to make Bengal comeback in Round 8 of Ranji Trophy 2015-16

Pacer Avesh Khan and leg-spinner Zeeshan Ansari have shone with the ball. Both have exploited the pitch at the University ground which has readily offered assistance to the bowlers. Bangladesh on the other hand have had a mixed bag of a tourney. They won both their matches against Afghanistan, but lost the other two against the home side. But their captain Mehidy Hassan Mirazhas has led from the front. Everytime Bangladesh have been found wanting, Miraz has delivered the goods with both bat and leather. Haroon Lorgat expresses enormous delight at Shashank Manohar’s ‘Big Three’ bullying comment

With the ball, left-arm off-spinner Saleh Ahmed Shawon Gazi has excelled, it will be interesting to see how the Indians tackle him in the final. But Bangladesh would know if they let the Indian batsmen off the hook, they are going to be in trouble and will therefore plan accordingly in what seems to be will be an engrossing contest. Sunil Gavaskar: Extremely significant win following for India limited-overs loss against South Africa Indian government yet to give permission for series against Pakistan: Rajeev Shukla 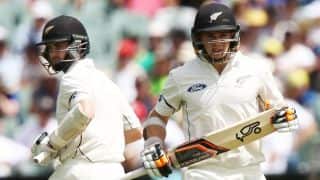