India confident of improved show in the remaining ODIs.

India are confident they can win their two remaining one-day internationals in New Zealand to salvage a draw from a series they were expected to dominate.

Although a series win is out of reach for India, who trail 2-0, spinner Ravichandran Ashwin said the dramatic tie in the third match in Auckland showed the tide is turning for the tourists, who have slipped to number two in the rankings.

New Zealand were denied a series-clinching victory on Saturday when a late flourish by Ashwin and Ravindra Jadeja produced a cliffhanger finish, with India scoring 17 off the last over.

“We were quite disappointed that we didn’t shut the game down. We would have loved to win the series, but we kept it open and we can tie it down now,” Ashwin said on Monday on the eve of the fourth game in Hamilton.

Coming into the series, India held the number one ranking and they were strongly favoured to beat the home side.

Instead, they extended a losing streak that began with back-to-back defeats in South Africa, losing their first game in New Zealand by 24 runs and the second by 15.

In Auckland, India again looked down and out when they were 184-6 chasing New Zealand’s 314.

“We’ve just not been at the best of our game. That’s the best point we can take forward, in terms of saying, we’ve not really played our best game yet,” Ashwin said.

“We’ve been fighting hard to the end and while things haven’t gone our way we just hope for the turnaround.”

New Zealand have been plagued in recent years by an inability to close out series when they have had the upper hand early on, but felt the tide had turned when they beat the West Indies in two Twenty20 matches before India’s arrival.

However, the nagging doubts returned in Auckland when captain Brendon McCullum admitted it was “potentially” one that got away.

“When they looked as if they were out of the game they flexed their muscle a little bit and got themselves back into it. And just when we thought we had it again, obviously they came back,” McCullum said.

The final match in the series is in Wellington on Friday, to be followed by two Test matches. 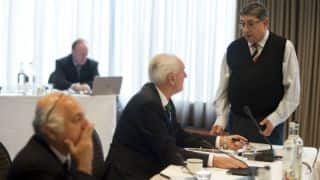