Anderson revealed that McGrath s illustrious record is not a priority and that his foremost aim is to contribute towards the team s performance.

England’s James Anderson will take the field in the third Test against India, starting August Saturday at Trent Bridge, Nottingham, 10 wickets behind Glenn McGrath‘s tally of 563 Test wickets. McGrath’s haul is the most for a seamer in history, and the fourth for anyone, behind Muttiah Muralitharan (800 wickets), Shane Warne (708), and Anil Kumble (619).

Anderson started the series 23 shy of McGrath s Test wickets, following which he displayed stunning form in the first two Tests, in which he s scalped 13 wickets, including a five-wicket haul at Lord s during the first innings. With England close to winning the series, and India behind the eight ball, Anderson, speaking to Sky Sports, revealed that McGrath s illustrious record is not a priority and that his foremost aim is to contribute towards the team s performance at Trent Bridge.

I’ve not really thought about it [overtaking McGrath], to be honest,” said Anderson. “I really try to focus on what I can actually effect now – the game that we are about to play, the spell that I am about to bowl. The wickets kind of take care of themselves if you bowl well enough for a long period of time.”

Anderson and Stuart Broad, with almost 1000 Test wickets between them, form the deadliest opening fast bowling combination, and India s primary goal would be to see them off. Broad broke the back of India s middle order in the second innings at Lord s, removing Cheteshwar Pujara, Ajinkya Rahane and Virat Kohli. Anderson, meanwhile, cemented his place at the top of the ICC World Rankings with a match haul of 9 for 43 in the same match and attained a career-high points total of 903.

“I think the fact that I’ve played quite a long time is probably the thing that I’m most proud of – putting in the hard work to stay on the field fitness-wise and then putting in the performances chasinto stay in the team. Being a part of some great England teams over the years is something I’ll probably remember more than some of the individual wickets,” Anderson said.

Trent Bridge also happens to be Broad’s home ground. In eight matches that Broad has played at the venue, he has picked 37 wickets at an average of 20.43 and has also registered career-best figures 8 for 15 at the very ground against Australia in 2015. His partner in crime, Anderson has 60 wickets, including seven five-wicket hauls, at a cost of 18.95 runs in just nine matches.

Broad echoed Anderson s take when it came to England prioritising team goals over Individual ones.

“Jimmy hit the nail on the head. I don’t think anyone in the England changing room really puts too much emphasis or focus on individual numbers,” Broad added. “The things you remember as a player are the moments in changing rooms when you win a Test.

“At Lord’s last week we just sat there and time disappeared chatting about the game, talking and watching a bit of telly. It’s those moments that you remember. Whether you fell one wicket short or went 100 past McGrath, I don’t think you’d sit there at the end and be overly disappointed or delighted; it’s more the brilliant spells you might remember or the moments of winning Test matches and Test series that you take with you when you finish.” 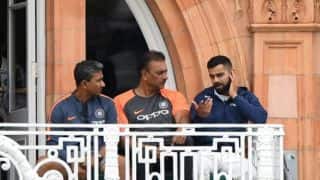