Despite the slump, Ali, who picked up 5/63 against India on Day 2, was confident of getting his act together.

Moeen Ali couldn t have asked for a better way to return to the England side. Having last played a Test in March against New Zealand, Ali left an impact straightaway in his comeback Test. On Day 1, he combined with Sam Curran to frustrate India with an 81-run stand and came back to torment them again with the ball, picking up a five-wicket haul on Friday.

For someone who s had to endure a forgettable winter he averaged just 18.81 with the bat, and with the ball he claimed just five wickets in six Tests at a cost of 126.80 this Test holds plenty of significance. He had gone back in time to 2014, where his 6/67 flattened India at the same venue and triggered India s downward spiral in the series.

“After my first over, I thought I was going to be in the game throughout this Test,” he said. “It’s always nice for an offspinner when there’s a bit of rough. And I was bowling at the same end as last time. That gave me some confidence.

“It’s all about mindset with me. I didn’t need to change too much technically. I just needed a fresh start. It’s nice to get a call-up when you’re in decent nick with bat and ball. You come into the game with confidence: it’s exactly what county cricket should be doing.”

Despite the slump, Ali was confident of getting his act together. When he was included in the line-up for the Southampton Test, it was on the batting grounds, considering his outing in the T20 Blast. Whatever more he could add is always a bonus.

“It was about believing I’m not a bad played after one bad winter. Many players have gone through that. It was about clearing my mind and moving on,” Ali said.

“The role in the side now is my best role. I’m mainly selected as a batter, but then I come on as a second spinner. It gives me a lot more confidence and freedom. I actually end up playing better.”

“I’ve loved being back at Worcestershire, having a good stint getting form back with bat and ball. It’s always nice to get a call-up when in decent nick as you can have that confidence coming into the game. It’s what county cricket should do,” Ali said.

“Australia is a difficult place for a foreign spinner, no matter who you are. For me it was about getting over that and coming back knowing I have played India in England before, done well and there was no reason why not again. This role is my best, batting [No. 7] and as a second spinner. It gives me confidence and freedom, and I end up playing better.” 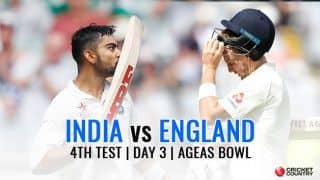