In Southampton, for the first time in his 39 Test matches as captain of the Indian team, has Kohli fielded the same team in consecutive games.

He is yet to win a toss in the ongoing series but Virat Kohli has broken an unusual streak for India. As revealed during the toss during the fourth Test between India and England, for the first time in his 39 Test matches as captain of the Indian team has Kohli fielded the same team in consecutive matches.

Speculations were rife that the trend might continue with a strong possibility of Ravindra Jadeja coming into the side. Kohli, however, announced that India were sticking to the same team that won the game at Trent Bridge, signalling the end of the streak.

Overall, before this Test, India had gone 45 straight matches chopping and changing. The last time India named an unchanged side in Test cricket was Lord’s 2014, under MS Dhoni, which implies that the streak started at the same venue where it was snapped, The Ageas Bowl, Southampton.

Kohli took over as India s Test captain during the fourth and final Test of India s tour of Australia in 2014-15. His first full-time series as a captain was India s tour of Sri Lanka in 2015, a three-Test series that Kohli s side won 2-1. Since, India have played Test matches in the West Indies, and hosted South Africa, New Zealand England and Australia during a bumper home summer season of 2016. During this time, Kohli s India also achieved the No. 1 ranking. Not once but twice.

Surprisingly, despite the incredible success India have achieved under Kohli, the Indian captain s toss record isn t as promising. In 39 Tests, Kohli has won only 18 tosses, the last of which came in the third Test against South Africa earlier this year. India won the dead rubber and finished the tour 1-2. However, thrice in a three-Test series has Kohli won all tosses against South Africa in 2015, New Zealand in 2016 and Sri Lanka in 2017.

Kohli s streak of 38 matches without the same XI is next only to Graeme Smith. The former South Africa batsman, who captained the side from 2003 to 2007, still holds the record for the most number of matches where the team’s line-up was tweaked. He went 43 straight games without sticking to the same Playing XI.

Bangladesh s Mushfiqur Rahim isn t far behind. He hasn t fielded the same team for 34 Tests and counting, behind former England captain Ray Illingworth. Illingworth, who was England s skipper during India s first Test win in the country in 1971, fielded 31 Tests without sticking to the same team. Another Indian in the list is one of their most successful captains, Sourav Ganguly. During his tenure as India s captain from 2000 to 2005, Ganguly, on 28 straight occasions, altered his team. 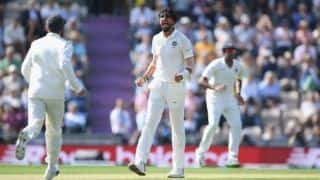