Virat Kohli became the 10th Indian player to bring up 6000 runs in Test cricket. Indian captain Kohli, on Friday, went past the mark during India s first innings of the fourth Test against England with a streaky boundary towards third man, becoming the second quickest Indian in terms of innings after Sunil Gavaskar. Kohli took 119 innings, just two more than Gavaskar s 117.

Overall, Kohli is the ninth quickest to the mark.

Walking in at the fall of Shikhar Dhawan s wicket at 50/2, Kohli, who got off the mark with a second-ball cover drive for four off Stuart Broad, took 11 balls to get there. Overall, Kohli became the 10th leading run-scorer for India in Test. The list is led by Sachin Tendulkar with 15921 runs. The time span Kohli has taken to go from 5000 to 6000 Test is only eight months and seven Tests. He breezed past 5000 runs in December last year during the third and final Test against Sri Lanka at home.

In terms of time, Kohli is the quickest Indian to the landmark, overtaking Rahul Dravid. Kohli took seven years and 70 days, whereas Dravid required seven years and 175 days. 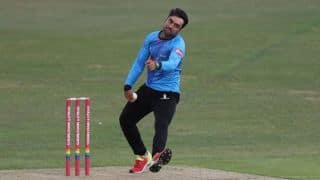