Bumrah revealed that his away from the game allowed him to learn the nuances of bowling in English conditions.

Jasprit Bumrah, who was sensational for India on a riveting fourth day of the Trent Bridge Test, revealed that his away from the game allowed him to learn the nuances of bowling in English conditions. Bumrah, 22, fractured his thumb at the beginning of the tour, and following a successful recovery, made a triumphant return to the team by picking up 5/85 his second five-wicket haul in Tests that keeps India just one wicket away from winning the third Test.

Bumrah returned to England and had his arm covered in a plaster. Apparently, the team management was waiting for Bumrah to recover completely and for his plaster cast to come off. At Lord s, he was seen bowling without the cast and was eventually declared fir for the third Test.

“Even though I was injured, I was bowling in the nets. When I was back home, I was training in the gym… whatever I could do to regain fitness,” Bumrah said. “I always was focusing and keeping an eye on what works over here, what suits my bowling. I was in fact studying both the bowling attacks and how the ball behaves in these conditions. What is helping the bowlers and things like that. I was just trying to replicate that in the nets. It takes time. It doesn’t matter how much you bowl in the nets because match form is always different.”

Bumrah had gotten rid of England captain Joe Root for the first of five wickets but had to wait for over a session for his second the ominous-looking Jos Buttler. Once the 169-run stand between Buttler and Ben Stokes was snapped, Bumrah used the new ball extremely effectively to remove the next two batsmen Jonny Bairstow and Chris Woakes in a span of two overs and later followed up with the wicket of Stuart Broad.

“We were having a chat as to what lines to bowl to him. So I had a chat with the captain and we bowled a little full, and one back of length. We got the edge and it worked for us,” Bumrah said on his dismissal of Root.

“We were happy that even when the ball got old, we were still bowling good line and lengths. The moment the sun came out, it got better to bat. But we always had the belief that if we keep on applying pressure, we will get the result. The second new ball was moving off the pitch because of the fresh seam, so that helped as well.”

Bumrah could have seen Buttler s on 1, had debutant Rishabh Pant held on to a catch diving to his right. But the 22-year-old didn t mind, as he eventually had him out leg before wicket offering while no shot. Bumrah credited his stint with Mumbai Indians, which Buttler was a part of for two seasons, for devising a plan against the attacking wicketkeeper batsman.

“I had bowled a little bit to him since we played together at Mumbai Indians. It’s always an interesting competition because he is an attacking player and very important member of their team. I was focussing on what has helped me. I got him out a few times in the IPL and at the nets too. So I picked up a little from there,” Bumrah said.

With two five wicket hauls in two Tests, Bumrah is proving himself to be every bit of the matchwinner in Tests as in the limited-overs format. His effectiveness can be gauged by the fact that he has been made to bowl long spells by his captain Virat Kohli, something Bumrah believes is not new to him.

“When I made my FC debut my first spell was of 10 overs. I have always been used to bowling long spells in Ranji Trophy so that always helps. When I was injured, I was working on my fitness and always in touch with my trainers so that whenever I would come back, I should be in a good space,” Bumrah said.

“In white-ball cricket, things are different because over there you try to outsmart the batsmen, whereas in Test cricket, it’s all about patience and consistency. So that was my main focus today. I was looking to bowl good lengths and always challenge them.” 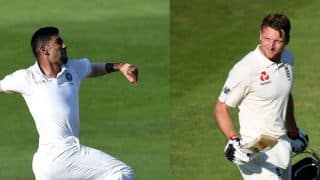