India will take on Afghanistan in the latter's inaugural Test match at Bangalore on June 14.

Shikhar Dhawan did not have an outstanding start to Indian Premier League (IPL) 2018, but he was devastating as the tournament went on, and finished with 497 runs for Sunrisers Hyderabad (SRH). With T20 cricket done and dusted, Dhawan is gearing up to take on Afghanistan in red-ball cricket. India take on Afghanistan in the latter s inaugural Test at Bengaluru from June 14. Talking to The Times of India ahead of the CEAT awards, Dhawan disclosed how eager he is to score against SRH teammate Rashid Khan: Of course. When I played him for the first time, I found him tough to deal with. However, now I’m used to playing him. If I play (in the XI), it’ll be a good challenge to play against him. I’ll look forward to scoring runs off him!

Dhawan also talked about facing competition from KL Rahul and Murali Vijay for opening slot in the Indian Test side: There’s always pressure. There’s pressure to retain your spot in every team. It’s a good thing for Indian cricket that there’s so much competition. All three of us are experienced. Rahul has done so well in the IPL, and in the series against Australia before that.

Dhawan also revealed who his favourite batsman in international cricket is: AB de Villiers. He’s a great batsman and more than that he’s a gem of a person too. A great leader. I have learnt a lot of things by just watching him. I’m happy that I played against him. 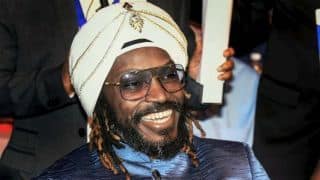