Catch the live full scorecard of the India vs Afghanistan match here.

Afghanistan, for their part, will are in danger of being overwhelmed by the occasion. This is the first ever 50-over World Cup they are playing, so they will surely be nervous. Their rise in international cricket has been one worth noting, and they have given a good account of themselves throughout. ICC Cricket World Cup 2015: POINTS TABLE.

India will desperately want to sort out their batting woes before taking on their arch-rivals Pakistan on February 15. Rohit Sharma was the only Indian batsman to score a century in the tri-series, while Shikhar Dhawan scored a fifty in the last practice match. Though Ajinkya Rahane has looked good throughout, Virat Kohli has failed to get going in the One-Day Internationals (ODIs) he has played so far this year. ICC Cricket World Cup 2015: SCHEDULE & MATCH DETAILS.

India have got off to a good start after a couple of early wickets. Rohit Sharma’s superb 150 and Suresh Raina’s attacking 75 stabilised the innings despite being 16 for two at one stage. Thanks to a late burst from Ajinkya Rahane, who remained unbeaten on 88, India ended at a commanding 364 for five.

This match will be crucial for India to determine whom to play in their first match against arch-rivals Pakistan. As things stand, Rohit looks like India’s best bet. Afghanistan started well, hitting the very wayward Mohammed Shami and Umesh Yadav all over the place. India’s pace bowling needs to find its groove before their opening clash or the 5-0 winning streak against Pakistan might not stay. Mohammed Shami at ICC Cricket World Cup 2015: Can he be the second Prince of Bengal? 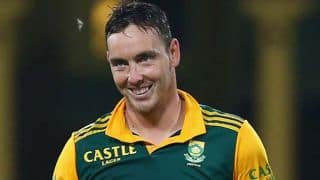 Kyle Abbott: We were counting down every run