Victor Trumper, Charlie Macartney, Don Bradman, Majid Khan, and David Warner are the only others to have done this.

Playing for India against Afghanistan in the latter’s debut Test (at M Chinnaswamy Stadium, Bengaluru), Shikhar Dhawan became the sixth cricketer (and second non-Australian) to score a hundred in the first session of a Test. He joined Victor Trumper, Charlie Macartney, Don Bradman, Majid Khan, and David Warner to become part of a unique hextet. Dhawan had raced to his fifty off 47 balls, but his second fifty was even quicker: he reached there in 40 balls, and followed up with four more. He remained unbeaten on 104 from 91 balls at lunch with 3 sixes and 19 fours. India are 158 without loss, with Murali Vijay on a 72-ball 41.

Dhawan is renowned for his outstanding conversion rate (he has converted 7 of his 12 fifties into hundreds). He is also known for accelerating once he goes past the fifty-mark. Three of his 7 hundreds have come at over a run a ball, while in two more he has scored at a strike rate over 88.

Dhawan was left out of the last two Tests of the South Africa tour earlier this year after he had an excellent 2017, scoring 550 runs at 68.75 and a strike rate of 92. Now back in the side, he has delivered again, announcing himself ahead of the England tour this summer. 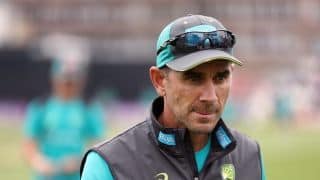