"I didn't know about the record till I came back into the dressing room at lunch where it showed on TV."

Shikhar Dhawan entered record books when he smashed a century before Lunch on Day One against Afghanistan. Dhawan became the first Indian and sixth player overall to do so. His knock of 107 off 96 balls gave India a rollicking start. However, Dhawan later admitted that he was unaware of the record: “It feels great. I didn’t know about the record till I came back into the dressing room at lunch where it showed on TV.”

The visitors relied heavily on their spin attack which leaked runs in the first session of the match. Rashid Khan, their superstar, gave away 13 in his first over. Dhawan targeted him in particular and attacked him mercilessly. The two play for the same IPL franchise (Sunrisers Hyderabad), which Dhawan admitted to be an advantage: “One thing is that I have faced him in the nets for the past two years as we play for the same IPL team. I am used to his bowling and that was an advantage for sure. It helped me.”

However, after being hammered by Dhawan and Murali Vijay in the first two sessions, the Afghan bowlers bounced back strongly in the final session picking up 5 Indian wickets. Rashid seemed very confident after he picked up Ajinkya Rahane, for 10.

“They came back very well in the final session and I am sure they are going to learn a lot of things and go a long way ahead. Of course, I enjoyed my battle with Rashid and I am happy that I dominated. But he is a great bowler and on his day, he will take some serious wickets,” told Dhawan at the post-match press-conference.

Vijay also registered his 12th Test century, a sedate one compared to Dhawan’s. Dhawan explained “Every player has his own game and a team is made up of different characters. My game is different from Vijay’s. Each one of us has different qualities. There are a few who love to step out and hit while a few play spinners from within the crease. Each one has his own plan. My strength is to step out and I played accordingly.

“I have full faith in my process and if you look at my earlier Test matches in Sri Lanka (barring the odd failure in Cape Town), I play with the same positive mindset. I was in good touch during IPL and wanted to continue with it.” 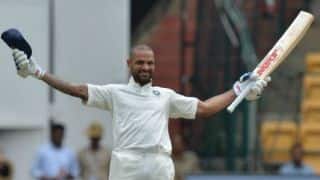 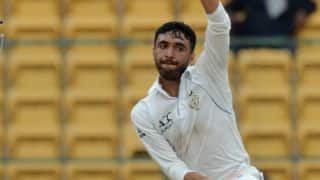