India were bowled out for their overnight total of 250 on the second day of the first Test against Australia in Adelaide.

India were bowled out for their overnight total of 250 on the second day of the first Test against Australia in Adelaide. Josh Hazlewood had last man Mohammed Shami caught down the leg side with the first ball of the morning.

However, India were off to a perfect start with Ishant Sharma producing a peach of a delivery in the very first over to have Aaron Finch bowled for a duck.

India’s first innings lasted 88 deliveries with Cheteshwar Pujara hitting a century a magnificent 123 off 246 which spared them the blushes after they were reduced to 127/6 at one stage. It was Pujara’s first century Down Under and 16th overall.

While Pujara was the top run-scorer of the India innings, the next best came from Rohit Sharma 37 off 61. Rishabh Pant and Ravichandran Ashwin scored 25 runs each for the joint third-best score.

Here’s how the India innings folded in Adelaide

Sit back and enjoy all 10 wickets from the first innings! #AUSvIND pic.twitter.com/7ZVjFqCE8d 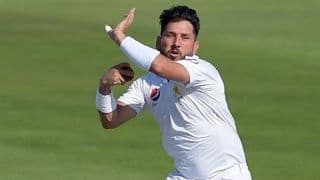