Clarke resumed his innings on 60 not out.

Skipper Michael Clarke was at the crease batting on 60 on Day Two of the first Test in Adelaide on Wednesday against India as he put a brave face on a “significant back injury.”

Clarke had retired hurt on the first day when on 60, after ducking inside a short ball from Indian quick Ishant Sharma in the 44th over on Tuesday, instantly grimacing in pain. The captain, who has three degenerative discs in his lower back, was sent for scans and had injections to soothe inflammation. He batted in the nets before the start of Wednesday’s second day to assess his injury and, despite opting to continue, team physio Alex Kountouris said he was “struggling.”

“Unfortunately, it’s quite a significant back injury,” he said. “He hasn’t had anything like this for 18 months, the last time was at the Champions Trophy in England.” Australia resumed the second day at 354 for six with Steven Smith unbeaten on 72.

Clarke went into the Test after overcoming a recurring left hamstring injury but Kountouris said his current problems were unrelated to this. Kountouris said the initial flare-up occurred seven overs before Clarke retired when he dived to make his ground at the non-striker’s end. “He felt it a little bit there. Then he tried to get out the way of a bouncer and it really grabbed,” he said.

“This is his right lower back. This is his old injury, what he’s had in the past. I don’t think it’s directly related to his hamstring, because it’s the other side. We believe it’s related to his old disc injuries. With that comes a lot of muscle spasms and other things that cause pain. So we’re just trying to relieve those elements of it and make sure we give him the best possible chance to be able to bat today.” 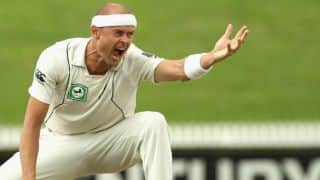 Chris Martin: Could bowl, could field, but...