Steven Smith crossed 150 for the first time in his career.

Steven Smith crossed 150 for the first time in his career, when he reached the landmark on Day Two of the first Test between Australia and India at the Adelaide Oval. Earlier, Michael Clarke scored his 28th century. Clarke came out to resume his innings on an unbeaten 60 at the start of the day after having retired hurt on Day One due to his poor back, and seemed like he might have to be ruled out of the match. Steven Smith scored his fifth century. Resuming his innings on 78, Smith started the day with a boundary through point, and continued on his way after that. 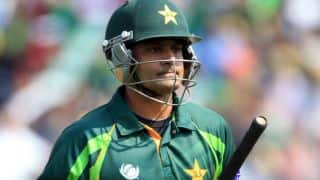 Pakistan vs New Zealand 2014: Mohammad Hafeez to be sent back to Pakistan after suspension for illegal action