Kohli was caught in the deep by Ryan Harris off Mitchell Johnson.

Virat Kohli was out after scoring his seventh ton, and second at Adelaide, on Day Three of the first Test between India and Australia at the Adelaide Oval. Kohli was out for a terrific 115, caught in the deep by Ryan Harris off Mitchell Johnson with less than five overs of play remaining in the day. Wriddhiman Saha was the man at No. 6 to join Rohit Sharma.

Earlier, Kohli and Ajinkya Rahane looked to be in excellent touch. Rahane was a bit jittery at the start of his innings, but grew in confidence and reached a superb half-century. Kohli was struck on the helmet off the first ball he faced, but recovered to score a secured half-century as well. Australia declared overnight on a score of 517 for seven. With just over 30 overs bowled on the second day, Australia continued to massacre the Indian bowlers, piling up a massive 517 for seven. Big centuries from Steven Smith, David Warner, and Michael Clarke boosted Australia. 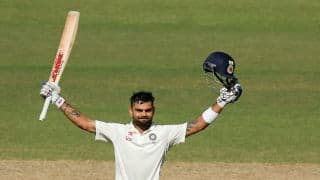 Virat Kohli's hundred of grit and character applauded on Twitter