Rohit was out caught and bowled by Nathan Lyon.

Rohit Sharma was dismissed for 43 on Day Four of the first Test between Australia and India at the Adelaide Oval. Rohit was out caught and bowled by Nathan Lyon immediately after he had stepped out and hit a boundary down long-on.

Earlier, India had scored 369 for five on Day Three, with Rohit Sharma and Wriddhiman Saha the unbeaten batsmen overnight. Mitchell Johnson and Nathan Lyon took two wickets each after Australia had declared before the start of play on Day Three. The Indian batting responded quite confidently to make full use of the helpful batting conditions. While it was majorly India’s day — skipper Virat Kohli scored his second century at Adelaide — Kohli’s dismissal minutes before stumps would have given Australia some relief. Had Kohli remained unbeaten, the advantage would have been India’s. His excellent 115 from 184 balls guided the Indians along with fifties from Murali Vijay, Cheteshwar Pujara, and Ajinkya Rahane. 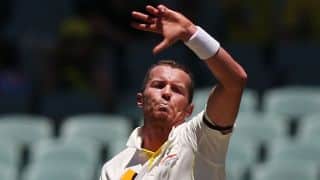