Replays showed the ball came off the front pad rather than the bat.

Ajinkya Rahane was dismissed for a five-ball duck on Day Five of the first Test between Australia and India at the Adelaide Oval. Rahane was given out wrongly when he was adjudged caught at short leg by Steven Smith off Nathan Lyon, but replays showed the ball came off the front pad rather than the bat.

Earlier, Virat Kohli scored his seventh Test ton and second of the match. Murali Vijay and Kohli were batting beautifully as India managed to score over 100 runs without losing a wicket in the second session of the day. Kohli followed up his first innings ton with another half-century in the second innings. Kohli went past fifty for the second time in the match. Earlier, Kohli completed 2,000 runs in Tests. Kohli reached the landmark when he scored his 31st run. Kohli, who is leading India for the first time in the longest format, had scored a hundred in the first innings as well. 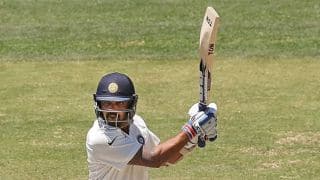