Clarke did not seem to be fully fit even while batting.

Michael Clarke had to leave the field on Day Five of the first Test between Australia and India at the Adelaide Oval. Clarke bent down to pick up the ball while fielding and immediately grimaced in pain. He was seen clutching his hamstring as he hobbled off the field. Earlier, Virat Kohli completed 2,000 runs in Tests. Kohli reached the landmark when he scored his 31st run. Kohli, who is leading India for the first time in the longest format, had scored a hundred in the first innings as well.

Murali Vijay scored his second fifty of the match. His half-century came off 131 balls. He was lucky to survive a very close call for LBW off Nathan Lyon earlier in his innings. Earlier, Cheteshwar Pujara was out for 21. Lyon, who was causing all sorts of problems for the batsmen, got one to spin a big way and take the outside edge of the bat through to Brad Haddin. Shikhar Dhawan was out caught behind early. Dhawan was surprised by a short ball from Mitchell Johnson and was caught by Brad Haddin. However, replays showed that the ball had hit his shoulder. 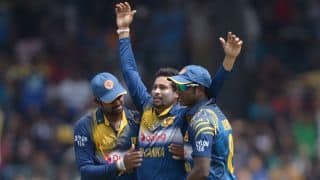