Ten days back, cricket world struck by tragedy when Phillip Hughes passed away after failing to recover.

In the minds of the cricket lovers, Phillip Hughes will remain ’63 Not Out Forever’ but today the departed cricketer was named his national team’s “13th man” as the first cricket Test between India and Australia started on an emotional note.

As Australia named their playing XI for the match, pacer Josh Hazlewood was listed as the 12th man and the players wanted to include Hughes’ name as the 13th man in the list.

Ten days back, cricket world struck by tragedy when Hughes passed away after failing to recover being hit by a Sean Abbott bouncer in a Sheffield Shield game. An entire nation went into mourning.

As the on-field action commenced today, it was all about celebrating the life of the ever-smiling Hughes with everyone present at the Adelaide Oval applauding in unison for exactly 63 seconds.

Incidentally, Hughes was batting on 63 when he was struck by Abbott’s bouncer. As a mark of respect, both teams wore black arm-bands. The entire Australian side had ‘408’ inscribed in their white jerseys. The number is significant as Hughes was the 408th cricketer to play in Tests for Australia.

“It’s really special. His family, I think that would make them very proud,” Mitchell Johnson was quoted as saying by ESPN Cricinfo. “I’m very proud to be able to wear that number through this Test. We’ve named him as the 13th man as well. It’s all very special.”

Rival captains Virat Kohli and Michael Clarke also remembered him during the toss. “What’s most important and what I know my little buddy would want is going out and playing cricket,” Clarke said at the toss. 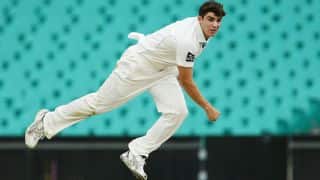 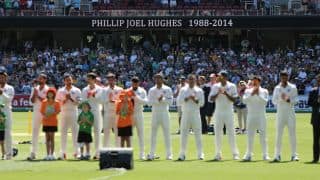