India vs Australia, 1st Test at Adelaide: Steven Smith scores 63 not out, pays tribute to Phillip Hughes
By CricketCountry Staff

Steven Smith got to the score of 63 not out in the first Test between India and Australia at Adelaide, and immediately looked to the heavens and tapped the black band on his arm. Phillip Hughes had scored 63 not out in his final innings before being felled by a bouncer. Earlier, even David Warner had gestured to the heavens when he got to 63.

Earlier, Karn Sharma took his maiden Test wicket, getting Warner to hole out to deep midwicket after scoring his 10th hundred. Warner spent a few emotional moments when he scored his 63rd run, after having previously propelled Australia to a flying start. Warner propelled Australia to 40 for no loss in just four overs. Things slowed down after that, but he got his fifty off just 45 balls.

Earlier, Varun Aaron got rid of Shane Watson. Aaron was wayward at the start, but induced an edge from Watson in the 19th over. Shikhar Dhawan took his second catch at slip as India picked up their second wicket. Michael Clarke was the new batsman for Australia. Mohammed Shami and Aaron opened the bowling for India, and Shami started well with just two off the first over. Thereafter, Warner went ballistic, hitting three boundaries off Aaron’s first over before continuing his charge against Shami as well. 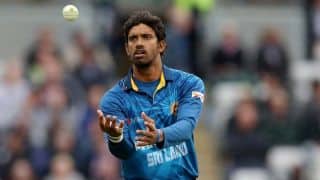 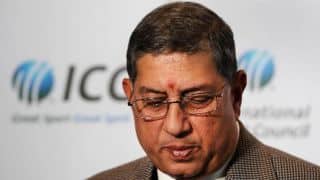