MS Dhoni's swashbuckling innings took India to within nine runs from the lead against Australia on Day Three of the first Test. India went into the tea break at 371 for six with Dhoni batting on 97 along with Ravinchandran Ashwin (3 not out). 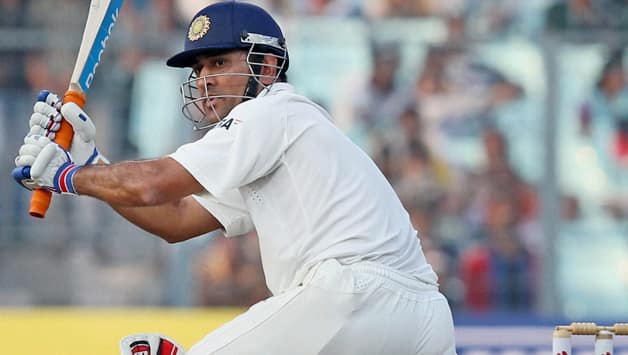 MS Dhoni‘s swashbuckling innings took India to within 10 runs from the lead against Australia on Day Three of the first Test. India went into the tea break at 371 for six with Dhoni batting on 97 along with Ravinchandran Ashwin (3 not out).

After sharing a 128-run partnership with Virat Kohli that dominated the morning session, Dhoni lost his partner to Nathan Lyon after lunch. But this was not before Kohli brought up his fourth Test century, while Dhoni recorded his sixth fifty against Australia.

The duo soaked in the pressure following Sachin Tendulkar‘s wicket in the first hour of the day and then launched a spectacular counter-attack on the Australians. They scored at a more than healthy rate, as the boundaries rained in for India.

There was a point, after the second new ball was taken, when Dhoni raced from 44 off 57 balls to 72 from 71. Kohli brought up his fourth Test hundred in the process , and didn’t look like stopping there. Dhoni was swatting around the bowlers from the other end and Kohli, relieved from the pressure of the nineties, decided to join in.

However, the 24-year-old didn’t last long as Lyon snapped him up for 107 after lunch. Kohli tried to smack the off-spinner over mid-on, where Mitchell Starc intercepted to take a brilliant catch. It was Kohli’s second ton is as many matches, after he scored one against England in the Nagpur Test. However, the disappointment was clear on his face as he holed out to mid-on.

Ravindra Jadeja then joined his captain in a bid to take India past Australia’s score as quickly as possible. While India’s run rate dropped from a run-a-ball to around four runs per over after Kohli’s dismissal, Dhoni was surging towards a spectacular century.

The 31-year-old Indian skipper raced into the nineties, before slightly slowing down his scoring rate. He looked set to reach his ton before tea, but for Jadeja getting cleaned up by James Pattinson for his fourth wicket of the innings.

The all-rounder from Saurashtra totally misjudged the line and offered no shot to an incoming delivery from Pattinson, who had switched to bowling around the wicket to the left-hander, only to see his sticks go flying.

Ashwin then joined Dhoni as the duo saw through the last few minutes before tea. India will be pleased with their efforts, now nine runs short of Australia’s total of 380, but would have hoped they had at least one more wicket in hand.

In the morning session, India lost the wicket of Tendulkar (81), but recovered well to take lunch at 263 for four.

Tendulkar and Kohli began proceedings cautiously in the morning session as Australia charged in with Peter Siddle and Pattinson. The duo maintained a good line and length, and continuously asked questions to the Indian batsmen, who found it difficult to score.

India were moving along at a snail’s pace when Lyon was brought on. The Aussies continued to probe and the off-spinner eventually got the all-important breakthrough, of Tendulkar no less.

Lyon pitched in the rough and bowled through the defence of Tendulkar. The little master failed to get to the pitch of the cherry and was deceived by the turn as the leg stump was disturbed. The jubilation that followed among the Aussies was an ode to how vital that wicket was. Tendulkar had fallen for 81 as Dhoni came out into the middle at No 6.

While a charged up Australia went for another wicket, Dhoni survived a few good chances against Lyon and Pattinson as he looked to take the risks. India were trying to increase their run rate after the slow start and Dhoni knew only one way to go about his batting. The Indian captain soon launched a counter-attack on the Aussies as he brought up the 50-run stand with Kohli in no time.

After the first hour of play totally belonged to the visitors, who were aggressive and probing with their bowling, Kohli and Dhoni courageously provided a response following Tendulkar’s fall. Kohli, in particular, was nicely getting to the pitch of the ball against Lyon and looked to have learned from Tendulkar’s mistake. The pitch was not getting any easier to bat on and that made the partnership even more important for India.

Shakib-al-Hasan ruled out of Test series against Sri Lanka