India required a little more than 11 overs to chase down a paltry target of 50 to win the first Test of the Border Gavaskar Trophy, but lost two wickets in the process. Sachin Tendulkar, at No 4, was needed to help India chase down 50 runs © PTI

India required a little more than 11 overs to chase down a paltry target of 50 to win the first Test of the Border Gavaskar Trophy, but lost two wickets in the process.

James Pattinson, fresh from a five-wicket haul in the first innings, dismissed Indian opener Murali Vijay (16) in the third over of India’s chase. Vijay went to smack Pattinson to the long-off fence, but mistimed his shot that went straight to Moises Henriques at mid-off.

The Chennai crowd that had turned out for Day Five wouldn’t have expected Sachin Tendulkar to walk out to bat again in this match. But Nathan Lyon dismissed Virender Sehwag (19) soon enough to give Australia their second wicket of the morning, with the score on 36 for two.

With 14 runs to win, Tendulkar walked in among huge cheers, and gave a lesson to his teammates on how to polish off a small chase. The little master opened his account with two bludgeoning sixes over long-on off Lyon.

Cheteshwar Pujara (8 not out) eventually hit the winning run in the 12th over to give India a much-needed win, albeit coming tougher than they would have expected.

Earlier, all-rounder Ravindra Jadeja took the final Australian wicket within the first half hour of play as Australia were bowled out for 241 in their second innings, nine runs more than their overnight total.

Lyon moved forward to play a front-foot defence shot to the left-arm spinner, but the ball bounced higher than he expected, clipped the bat-pad and went to Murali Vijay at short leg.

Henriques (81 not out) and Lyon (11) frustrated the Indian bowlers in the third session of Day Four by sharing an unbeaten 57-run last-wicket partnership. India have had problems getting the tail out in the recent past, and a last-wicket 50-plus stand did that reputation no good.

Man of the match: MS Dhoni 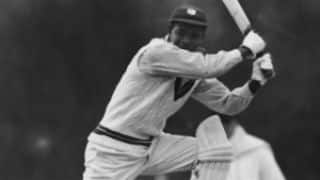