India opted for Rohit at No 6 in place of Hanuma Vihari.

Virat Kohli called correctly at the toss – an achievement, considering all those wrong calls in England – and had no hesitation in deciding to bat as the first Test between India and Australia got underway in sunny Adelaide on a drop-in pitch promising plenty of runs.

This is the second time in the last nine away Tests that Kohli has won a toss.

Terming the Adelaide Oval pitch as “brilliant”, and confirming that India opted for Rohit Sharma over Hanuma Vihari at No 6, Kohli backed his team to put up a big total at the venue where four years ago he began a personally successful tour of Australia with twin centuries.

“Looks like a nice hard wicket with a nice covering of grass. Runs on the board will be handy,” said Kohli. “Every tour is an opportunity, it’s a difficult challenge in Australia. We are looking forward to a challenging series. I love playing here in Adelaide, the wicket is good and the stadium is great.”

The uncapped Victoria batsman Marcus Harris makes his Test debut at Adelaide Oval, slotting in as opening partner to Aaron Finch in Australia’s XI. His state captain Peter Handscomb is back for his first Test since April.

“We would have batted as well, there are some damp spots and we will look to make the best of that,” said Australia skipper Tim Paine. “Its nice to start in Adelaide and we’ll look to do our best. We think three pacers and Nathan [Lyon] will do the job, they are pretty fresh and we have an all-round attack.”

A bit of wobble is expected in the first hour, as you expect from a Test match, but thereon it is the batsmen who need to cash in. 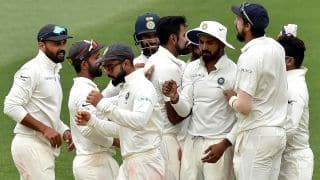