Steve O'Keefe claimed six batsmen in each Indian innings to end up with figures of 12 for 70, paving way for his side's 333-run victory in the first Test.

Pune: He emerged a hero in Australia’s comprehensive win over India with his magical bowling but spinner Steve O’ Keefe had not expected himself to cause batting collapse twice. O’Keefe claimed six batsmen in each Indian innings to end up with figures of 12 for 70, paving way for his side’s 333-run victory in the first Test.”I didn’t think it was going to turn out the way it did today. One of the things from bowling for a lot of time is that you build up a lot of belief. When you’ve got good structures around you with the captain and the coaching staff, you’re going out there feeling confident in your own ability. And that’s an important place to be out there particularly as a spinner,” O’Keefe said at the press conference.Full cricket scorecard: India vs Australia, 1st Test in Pune

“So to say that I was going to take 6 for 35, no I didn’t think but I had belief I could keep hitting the same area, and that was just the result of it today,” he added. O’Keefe said he was actually relieved that he could contribute in his side’s first win in India after such a long period.”Probably relieved, it’s the main one. It was a long time coming, a lot of preparation has gone into this one before we travelled over here. We went to Dubai before coming to Mumbai. IND vs AUS, 1st Test: O’Keefe’s 12-for gifts visitors win in series opener

So I am just relieved with the position that we’re in, 1-0, and to personally take some wickets. It gives me a lot of confidence going forward.” Malaysia-born O’Keefe said he enjoyed bowling in tandem with senior spinner Nathan Lyon who picked up five wickets in the series-opener.”Nathan and I enjoy bowling together, we’ve done it for a long time. We’ve done it unsuccessfully and we’ve done it successfully. The best thing about Nathan is that he takes that in his stride and we’re willing to communicate in how we can improve and we do that throughout the match. We’ve got a good relationship, and that’s going to be important going forward,” said the 32-year-old bowler who played in only his fifth Test. But he did not expect smooth sailing in the remaining matches.

“These guys are great players and great players of spin in their own backyard. So there are going to be tough days, and the good relationship will certainly help. We enjoyed today for sure.” The man-of-the-match bowler’s analysis is the second best for an overseas bowler in India, after Ian Botham’s 13 for 106 in the Golden Jublilee Test at Mumbai’s Wankhede Stadium in 1980. 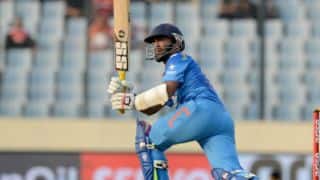 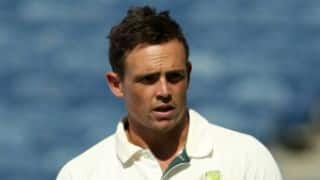