Sunil Gavaskar talked about Mayank's dismissal and said a truck could have gone between that bat and pad.

Batting great Sunil Gavaskar lashed out at Indian openers Prithvi Shaw and Mayank Agarwal after dismissal show in first innings of Day-Night Test at Adelaide Oval. Shaw, who is going through a rough patch, was dismissed on a duck on the second ball of Day 1 as Mitchell Starc broke his defence with a sharp in-swinger.

Mayank Agarwal became the victim of Pat Cummins’ peach of a delivery which nipped back in and breached the opener’s defence to hit the top of middle stump. Mayank failed to convert a good start into a big score and dismissed on 17.

Gavaskar slammed the technique of the opening duo as he talked about the space between their bat and pad, which hurt them on Day 1. Gavaskar pointed out the flaws in Shaw’s technique at the start of the innings.

“The trick is to try and play as close to the pads as possible, which means your bat speed has to be minimal at the start of the innings. As you grow in confidence, yes then you go and play your shots. But at the start when you are not even off the mark, you want to try and reduce your bat speed. Don’t leave any gap between bat and pad,” Gavaskar added.

The legendary batsman further talked about Mayank’s dismissal and said a truck could have gone between that bat and pad.

“Well again, you can have a look at this. He’s (Mayank) played very hard at the ball, later on. This particular shot shows that the bat is close to the pad. It wasn’t. The ball snicked through there was such a big gap..a truck could have gone. A truck could have gone between that bat and pad. So that’s what the Indians are making a big mistake,” Gavaskar further said on Mayank’s dismissal. 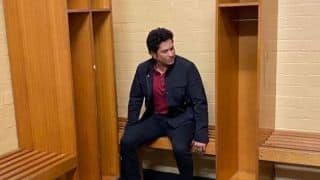