Travis Head hit a stubborn half-century to keep Australia in the hunt Friday after their top order slumped under sustained pressure from India’s bowlers, leaving the first Test in Adelaide finely poised. Batting on his home ground, Head kept his cool in the humid conditions to be 61 not out at stumps on day two, with Mitchell Starc unbeaten on eight.

His efforts helped steer Australia to 191-7 in reply to India’s 250. Offspinner Ravichandran Ashwin bowled beautifully to take three wickets, while Ishant Sharma and Jasprit Bumrah grabbed two each. It was Head’s second 50 in his third Test, with the Adelaide-born 24-year-old playing the sort of gutsy innings that his more experienced teammates couldn’t match.

All of Australia’s top four were back in the pavilion without passing 30, with Aaron Finch (0) and Shaun Marsh (2) notable failures. It once again reinforced how much Australia are missing Steve Smith and David Warner, who remain banned over their part in the South Africa ball-tampering affair.

“It was nice to do a job for the team and it will be an exciting day tomorrow,” said Head. “We hung in there. India bowled exceptionally well. It was (a) fantastic little fightback in the end and it will be an important first hour tomorrow. Every run will valuable.”

Debutant Marcus Harris, who made 26, added: “It was a tough day, it wasn’t easy to score. I think we’re in a decent position.”

Ashwin agreed that the Test match for there for the taking. “I see it as neck and neck as far as the game goes right now,” he said.

India resumed on 250-9, but they were unable to add to the total with tailender Mohammed Shami out for six on the first ball of the day, caught behind by Tim Paine off Josh Hazlewood, leaving Bumrah unbeaten on 0. Hazlewood finished with 3-52. Mitchell Starc, Pat Cummins and Nathan Lyon all took two wickets each.

In reply, Australia got off to a horror start with Finch’s credentials as an opener again called into question after he was spectacularly bowled without scoring on only the third ball he faced. A lovely delivery from Sharma took out his middle and off stumps after getting an inside edge as Finch attempted a drive.

Harris looked in good nick and unruffled by the occasion, hitting three fours in his solid 26. But he was undone by a drifting ball from Ashwin, getting an edge to Murali Vijay at silly mid-off and ending a 45-run partnership with a slimmed-down Usman Khawaja who was back after knee surgery.

Ashwin’s off spin was causing problems and Marsh needlessly slashed at a wide delivery in the first over after lunch, dragging it onto his wicket. The woeful shot extended his dire recent Test form and left Australia in trouble at 59-3. Marsh has now slumped to six consecutive single-figure scores, failing to step up in the absence of Smith and Warner.

Khawaja, whose Test preparations were disrupted after the shock arrest of his brother this week for allegedly framing a love-rival with a fake terror plot, was Ashwin’s next victim. Wicketkeeper Rishabh Pant took an excellent catch after a turning ball flicked off Khawaja’s glove. He was out for 28 on a review decision.

A gritty knock from Peter Handscomb, brought into the side for all-rounder Mitch Marsh, ended on 34 soon after tea with Bumrah breaking what was shaping as a handy partnership with Head. It brought Paine to the crease, but he was unable to stop the rot and added only five runs before becoming Sharma’s second scalp.

Cummins joined Head and they began to find gaps in the field as India tired, putting on a 50-run stand before Cummins lbw to Bumrah for 10 late in the day. 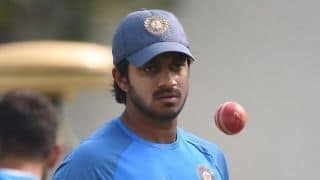