Australia reached 183 for five at the end of 38 overs against India in the third One-Day International (ODI) at the Punjab Cricket Association (PCA) Stadium in Mohali on Saturday. 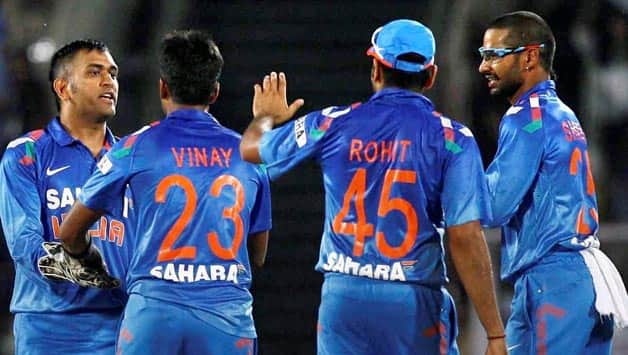 Australia reached 183 for five at the end of 38 overs against India in the third One-Day International (ODI) at the Punjab Cricket Association (PCA) Stadium in Mohali on Saturday.

Bailey was not only the man in form, but was also looking good in the match.

In a moment of confusion mid-pitch, the visitors also lost Glenn Maxwell, who was out of the crease as Shikhar Dhawan hit the stumps with a direct hit,

Australia took the Batting Powerplay in the 34th over as both the batsmen were well set at the crease. With temperature dropping and dew slowly setting in, Australia played cautiously in order to save wickets for a late flourish.

However at the end of the 35th over, India looked in command.

After both the batsmen took the attack on Yuvraj Singh in the 27th over, Mahendra Singh Dhoni brought back Ravichandran Ashwin into the attack from that end. From the other end, Jadeja continued to keep a tight line.