India reached 150 for five in 30 overs against Australia in the third One-Day International (ODI) at the Punjab Cricket Association (PCA) Stadium in Mohali on Saturday. 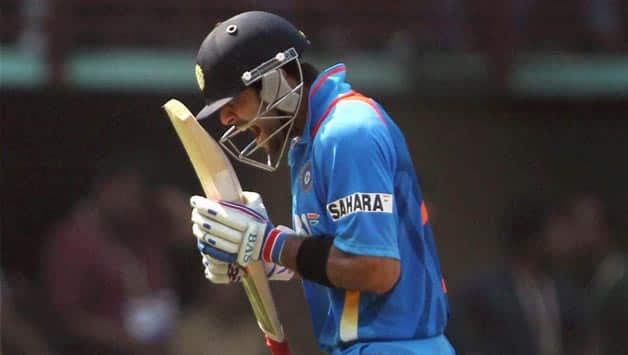 India reached 150 for five in 30 overs against Australia in the third One-Day International (ODI) at the Punjab Cricket Association (PCA) Stadium in Mohali on Saturday.

Virat Kohli and Mahendra Singh Dhoni started unleashing their attacking instincts as they raised the tempo of the Indian innings. Although, they didn’t get going at their best, both the batsmen made their intent clear.

The pair consolidated the innings after India were reeling at 76 for four at one stage. However, Kohli was dismissd in the 30th over trying to cut Glenn Maxwell, but found an edge and was smartly taken by Brad Haddin.

Mahendra Singh Dhoni got off the mark in the seventh delivery with a hard drive between point and cover. However, he was cautious in his shot selection. After injuring his hamstring before drinks break, his discomfort while running was evident. Kohli, on the other hand, looked in good nick.

Jammu and Kashmir to host All India postal cricket tournament