India reached 190 for six in 37 overs against Australia in the third One-Day International (ODI) at the Punjab Cricket Association (PCA) Stadium in Mohali on Saturday. 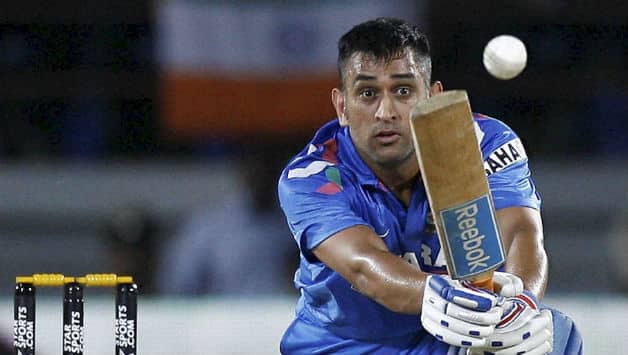 India reached 190 for six in 37 overs against Australia in the third One-Day International (ODI) at the Punjab Cricket Association (PCA) Stadium in Mohali on Saturday.

Indian skipper Mahendra Singh Dhoni brought up his 49th ODI half-century off 77 balls to keep India’s hopes alive. He brought it up with a boundary.

Australia pulled things back with the twin strike of Virat Kohli and Ravindra Jadeja and brought down the scoring rate. However, the 37th over yielded three boundaries.

Jadeja continued to prove how Indian batsmen struggle against good short-pitched deliveries as he became the fourth player in the innings to lose his wicket for playing a poor shot to a shot pitched delivery.

The Indian innings got off to a quiet start, with the two runs coming off wide deliveries. The first run off the bat came off the eighth delivery as Dhawan played an exquisite cover drive for a boundary. However, McKay returned to beat Dhawan’s bat with an away-going delivery outside off. Dhawan came back to flick a delivery off his legs for another boundary. Nonethless, McKay eventually won the battle as he squared Dhawan with an off-cutter to find an edge which was safely pouched by the wicketkeeper.

The pair consolidated the innings after India were reeling at 76 for four at one stage. However, Kohli was dismissed in the 30th over trying to cut Glenn Maxwell, but found an edge and was smartly taken by Brad Haddin.

Jammu and Kashmir to host All India postal cricket tournament