Ed Cowan's answer to Australia coach Mickey Arthur's demand for preparing a presentation on how to improve team performance was not a 10-slide power-point outline, but a desire to "bat for as long as one could." 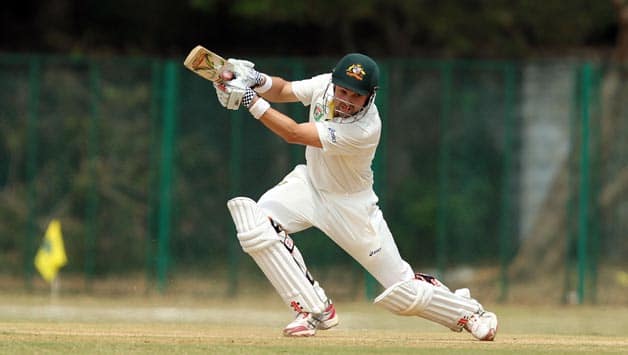 Ed Cowan‘s answer to Australia coach Mickey Arthur‘s demand for preparing a presentation on how to improve team performance was not a 10-slide power-point outline, but a desire to “bat for as long as one could.”

After a string of low scores, Cowan on Friday brought his flagging career back on track with a gritty 86-run knock on the second day of the third and penultimate cricket Test against India in Mohali.

“I told the coach that I wanted to bat for as long as possible, I gave him a number, but that is between him and me,” Cowan said when asked what were his views and thoughts.

“Though I have not completely succeeded, I think I did play a part for the team’s cause,” the 30-year-old New South Wales opener said at the end of the day’s play.

Cowan was involved in a 139-run for the first wicket David Warner, helping Austraia to 109 for no loss at Lunch.

The opener believes that a little bit of luck helps in performing on the challenging spin-friendly wickets of India.

“You need a bit of luck to score runs in these conditions,” Cowan said when asked if the Indian fielders should be credited for his two reprieves.

Talking further, he stated,”The wicket was similar to the one in Hyderabad, there is no grass and there could be cracks and (there was) reverse swing.”

Considering that the opening day of the match has been lost due to rain, Cowan felt the Australians will have to put at least 350 on the board and then bowl well enough to restrict the Indians.

Australia were 273 for seven at stumps, with Steven Smith and Mitchell Starc at the crease.

“You just have to be on the game in such challenging conditions.”