A morale-boosting win clinched in the opening Test, a confident India will look to consolidate their position by putting up another dominant performance in the second cricket Test against Australia starting in Hyderabad on Friday. 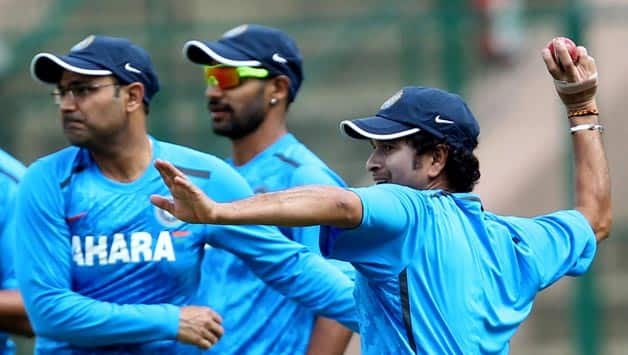 A morale-boosting win clinched in the opening Test, a confident India will look to consolidate their position by putting up another dominant performance in the second cricket Test against Australia starting in Hyderabad on Friday.

After putting the visitors on the mat, riding on Mahendra Singh Dhoni‘s individual brilliance and an equally impressive show from off-spinner Ravichandran Ashwin, the home team would aim to guard against complacency having learnt their lesson the hard way from the England series.

Dhoni and his men would be determined to ensure that Australians aren’t let off the hook like Alastair Cook’s England, who rallied to win the previous Test series 2-1.

The Indian captain’s superlative effort in Chennai could well turn into a series defining knock and his leading from the front is the shot in the arm that the team required as it was not performing as per expectations in the longer format.

The last time India played at the Rajiv Gandhi Stadium in Uppal, they inflicted a humiliating innings and 115-run defeat on New Zealand with Ashwin grabbing 12 for 85.

That particular match which ended on the fourth day could well have ended inside three days had weather not played spoilsport on the curtailed second and third day.

Therefore Team India will certainly not deviate from their ‘turning track template’ and Ashwin and co will certainly have a huge role to play again as the hosts look to go for the kill.

A 2-0 lead will not only push the Aussies back to the wall but it will also ensure that making a comeback in the four-Test series will be practically impossible for the visitors.

The hosts also have lesser worries regarding the team composition save whether they would be playing local boy Pragyan Ojha on his home ground.

Even though both Murali Vijay and Virender Sehwag flopped in Chennai, Dhoni and the team management are unlikely to tinker with the opening combination as he had indicated at the post match press conference after the first Test.

The Indian captain has never been a firm believer in too much of chopping and changing and might just like to go in with the winning combination.

The middle-order picks itself and the question arises whether Ojha, who certainly got a raw deal in Chennai, gets to play in front of his home crowd.

Bowling combination is one area where Dhoni will need to put in some thought. While Ojha is a far better left-arm spinner than Ravindra Jadeja, the Saurashtra all-rounder did his cause no harm by picking five wickets in the first Test and complementing Ashwin well.

Harbhajan Singh wasn’t at his best in the first innings but looked like hitting some form in the second innings where he got important wickets of David Warner and Matthew Wade.

Playing four spinners can be a luxury as was proved during the Nagpur Test against England as Piyush Chawla was the one who was underbowled in both innings.

But in order to put more pressure on Australia, that’s the only way to fit Ojha in at the expense of a pacer.

It is an open secret that Ishant Sharma and Bhuvneshwar Kumar don’t have the ability to generate consistent reverse swing with the old ball and their pace is hardly troubling the Aussie batsmen with the new ball.

Dhoni might just be tempted to drop one among Ishant and Bhuvneshwar, who collectively sent down 33 overs in the first game with Ishant getting three in the second innings coming in to bowl in the 76th over. The debutant UP pacer didn’t get to bowl at all.

Bhuvneshwar, however, was praised for his patient knock which helped Dhoni reach his double century and give India a winning lead of 192 runs.

The Australians, on the other hand, will certainly be tempted to a play a second specialist spinner but even skipper Michael Clarke knows it all too well that neither Nathan Lyon is of Graeme Swann’s class nor does left-arm spinner Xavier Doherty possess the calibre of a Monty Panesar.

While Doherty’s performance was the best among the spinners during practice games, IPL’s newest ‘Million Dollar Man’ Glenn Maxwell will be in the selection radar considering he is a capable batsman.

With Australia’s middle-order performing below expectations, a few changes could be expected. Phillip Hughes’ way of countering spin wouldn’t have inspired the highest level of confidence.

Usman Khawaja is Hughes’ direct replacement but there remains a possibility that Shane Watson would be pushed to the No 3 slot, fitting in Maxwell in the middle-order.

This move will also give the Aussies a chance to push in Doherty by dropping either Peter Siddle or Mitchell Starc.

The bottomline for Australia, however will remain how well their skipper bats. The visitors would want that Clarke, who is inarguably their best player of spin bowling, leads the charge once again.

Ideally, they would like Clarke to follow in Cook’s footsteps and he has already set the tone with an impressive century in Chennai.

A lot of responsibility will also rest on Shane Watson’s shoulders as he is playing in this series purely as a batsman.

Watson is a vital cog in the Aussie set-up and his performance with the willow will certainly have a lot of impact in the remainder of the series.

Moises Henriques’ lion-hearted effort must have given Clarke the confident feeling of not only having a batsman adept in handling the Indian tweakers but also a steady wicket-to-wicket medium pacer which gives the skipper chance to play around with his options.