India vs Australia 2013: I was nervous while approaching my hundred, says Shikhar Dhawan

India vs Australia 2013: I was nervous while approaching my hundred, says Shikhar Dhawan

The way he went about decimating the Australian attack in the third Test in Mohali on Saturday, Shikhar Dhawan very much looked like a man in great hurry, but the India debutant said he was a bundle of 'nerves' while approaching milestones in his mesmerising knock. 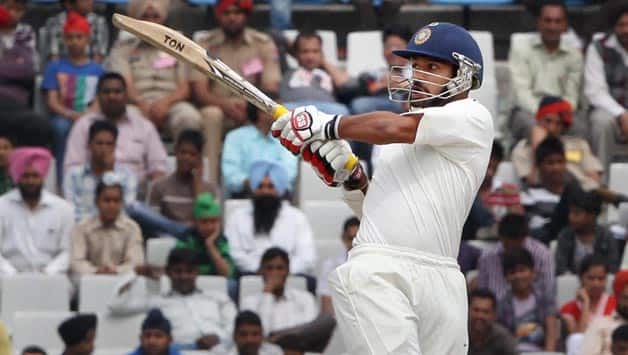 The way he went about decimating the Australian attack in the third Test in Mohali on Saturday, Shikhar Dhawan very much looked like a man in great hurry, but the India debutant said he was a bundle of ‘nerves’ while approaching milestones in his mesmerising knock.

The left-handed batsman rewrote one record after another, before proclaiming that he ‘belongs’ to the big league.

Dhawan announced his arrival on the Test arena with a blistering 168-ball 185 the fastest by a debutant in the history of Test cricket, giving India a toehold in the penultimate match of the series. He also breezed past Gundappa Vishwanath’s record of highest Indian scorer on debut.

“You couldn’t feel it, but I was really nervous as I approached my fifty and century,” Dhawan told reporters after the end of the third day’s play, with India sitting pretty at 283 for no loss in reply to Australias 408.

Asked if he feels he belongs to the league, the 27-year-old Dhawan, though somewhat repeated the line on a lighter note.

“I was not in a hurry, the fours were just coming, the shot selection was good and I was in flow,” Dhawan, who had started his first-class career nine years ago, said.

“I have been working hard since being dropped from the Indian team I have changed myself, I was waiting for a chance.

I am happy that I grabbed it with both hands. I am feeling good, I thank God, it has always been a dream to score runs on debut,” he said.

The Delhi boy was quick to thank his half Bengali, half British wife, who is settled in Australia.

“I have got an Australian wife who lives in Melbourne with two daughters. I thank my wife and kids, they were praying. I spoke to my wife and it was a very emotional for her,” he answered when queried by an Australian scribe.

Talking about his innings he said, “There was no strategy. I was just middling the ball and wanted to play the ball according to merit. It is a satisfying feeling. I grabbed the opportunity with both the hands.”

If his Test debut hogged the limelight, Dhawan had a disastrous outing in his maiden ODI, failing to open his account. That, incidentally, was also against Australia, in 2010.

“I remember my ODI debut which was also against Australia, I got out for zero and [Mahendra Singh] Dhoni bhai and Suresh Raina told me that whoever has got out for zero on India debut have done well later on.”

Sporting a moustache that reminds one of Mangal Pandey, Dhawan seemed to be at ease throughout the innings.

Dhawan could have been technically out before facing his first ball in Test cricket. As the first delivery of the innings slipped out of Mitchell Starc’s hand before hitting the stumps, the debutant was out of the crease and well on his way. The Australians, though, didnt appeal, as it was not intentional. Dhawan was seen smiling after that.

When asked he said, “I smiled would have created history if I had got out in that fashion without facing a ball.” [sic].

The batsman thanked his opening partner, Murali Vijay, who was approaching his century at stumps, for congratulating him on the first run in Test cricket.

“I felt happy that Vijay congratulated me on scoring my first international run. As I had said, we have opened together in past and have a good understanding.”

Asked if playing the Aussies during his last tour Down Under helped he said, “I have faced them in the emerging trophy, I knew their bowling but they are all good bowlers.”

Last but not the least, Dhawan thanked his coaches who have played a part in shaping his career.

Syed Mushtaq Ali trophy to be played in 10 different venues