India's man of the moment Ravichandran Ashwin feels that Michael Clarke's sure shot dismissal could have reduced Australia's score by at least 70 runs but they need to pack off the visitors within another 30 runs at the start of the second day. 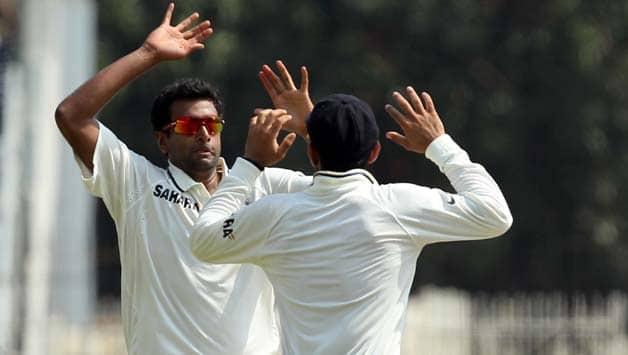 India‘s man of the moment Ravichandran Ashwin feels that Michael Clarke‘s sure shot dismissal could have reduced Australia‘s score by at least 70 runs but they need to pack off the visitors within another 30 runs at the start of the second day.

“I think we need to pack them off within another 20-30 runs but we could have reduced their score by 60-70 runs if he’d (Michael Clarke) been given out. But it does happen, it’s part of the game,” Ashwin told mediapersons about Australian captain being given not out on 39 when TV replays showed that it was a bat-pad catch to forward short-leg fielder.

Ashwin was forthright in stating that he appealed as he was fully confident that Clarke had hit the ball.

“It was clear to me that he hit the ball and that’s why we all went up to appeal. At the end of the day, it does happen. And Kumar Dharamasena is himself an off-spinner… We thought he’d give a few dismissals to me, to look at the lighter side,” the burly off-spinner, who had figures of 6 for 88 said.

He did admit that the thought of emulating Anil Kumble’s feat of getting 10 wickets did cross his mind.

“I’d be lying if I said no! Because the way things were going since the morning, the way the ball was coming out of my hand, I thought OK, actually it’s a real possibility here. But in between, I had an injury on my finger and I had to go off the field. That took the momentum out a bit. Henriques and Clarke got in and they batted beautifully after that.”

The 26-year-old however snapped back when someone asked him about his dip in form against England.

“See, I honestly think I didn’t have a bad series against England. So if that was your opinion, yes you’re supposed to have your opinion and I won’t barge in on that, but I bowled exactly the same as I bowled against England, but yes today the wickets were coming.”

Ashwin feels that people who are sitting outside have a penchant for judging a bowler’s form based on the number of wickets he has taken.

“Yes, it does happen. Everyone sitting a distance away tend to say that the wickets column should say something, they say you bowled beautifully. On another day, they end up saying you didn’t bowl that well even if you did. So I’ve got into a mindset where I actually have to put that behind my mind and go about doing what I do best.”

The offie denied having done anything different from what he bowled during the series against England.

“I would say no, apart from touching up a few things with my coach, I didn’t anything at all. I think I varied my pace at different points on the day. I’ve got to say this, today’s spell is dedicated to my coach Sunil Subramaniam because he identified a small thing and we worked on it for five-six sessions in between the Corporate Trophy and this series.”

“The credit goes to him (Subramaniam) because it’s very easy to spot a mistake, but that mistake’s root cause could be somewhere else. But to exactly nail that and to get me out of that is what he did and all credit goes to him. It was about body position and nothing else.”

Also Alastair Cook‘s form was a factor during the last Test series.

“That’s the beauty of this game. Suddenly, if someone gets on a roll… the way Cook batted against us, he took the momentum away from us. That was probably the difference between the two teams, how you start the series, how you end up plugging things… He was in superb form.”

According to Ashwin, the pitch was a deceptive one as it didn’t turn as much as they thought it would.

“The pitch looked very dirty, to be very honest. After the first 5-10 overs, it looked dirty and we thought it was going to spin like a top. You come out and you think it’s going to spin a lot. But it actually didn’t spin at all, to be honest. I think its going to get slow, and hopefully Starc would create some rough for the second innings.”

He was sceptical about answering a query as to why other Indian spinners (Harbhajan and Jadeja) weren’t as successful as he was.

“See… if I say something, I don’t know what’s going to be played up! To be very honest, Jadeja bowled very well and he was hitting the mark and we were conceding a few runs on both sides of the wicket here and there, which does happen at Chepauk.”

“See, when I come out to this ground, I feel the air talks to me, every person sitting in the stands talks to me, and I feel really comfortable. I know this ground like the back of my hand. There are certain things… that have gone wrong for me and I’ve learnt from them… you tend to leak runs on both side of the wicket because of the bounce.”

Initially, he didn’t bowl a lot of deliveries to Clarke and when asked about the reason for it, he said,”No, I think he wanted to keep me fresh at different times of the day, bowl shorter spells. I think I’d bowled 20 overs already in the day, it made sense. I could return fresher when I came back into the attack.”

Ashwin discounted the theory that reverse swing could come into effect.

“What I know is that at Chepauk, reverse swing isn’t a big factor for the simple reason that it bounces, and it’s not like you hit the pad often you get leg before. They do have four quality seamers, we’ll have to wait and watch.”
Ashwin went on the defensive when the question of dropping Pragyan Ojha popped up.

“I wish I could answer that. I would have answered that if I knew what the reason is. But the fact that they had a lot of left-handers, we had to play two off-spinners. Even if I were the captain, I would have done the same thing.”

The player also differed on the opinion that Indian bowlers didn’t attack Clarke a lot during the early part of the innings.

“We had just one fielder on the deep on off-side, when he (Clarke) was batting for the first 50 balls and I don’t think you can attack more. After a point of time, you need to be sensible rather than challenge the conditions.”

Playing his first Test match at the Chepauk was a big occasion for Ashwin.

“I’ve played a plenty of IPL games here, 3-4 ODI games too and international Twenty20 too. But all that comes nowhere close to Test matches. For the last two days, I couldn’t connect with what was happening. I was in complete awe, smiling all through the last couple of days. The ground looked picturesque. I’ve never seen Chepauk greener than this, I’ve never seen Chepauk more beautiful than this. Just had a wonderful day today.”

“I was very happy to be part of this Test match and I was actually telling myself that even if this had to be my last Test match, it will be the happiest day of my life,” he signed off.