Australian skipper Michael Clarke on Friday reckoned that spin will "again play a big role" in the second Test against India here but was non-committal on whether he would go with an extra spinner or a fast bowler. 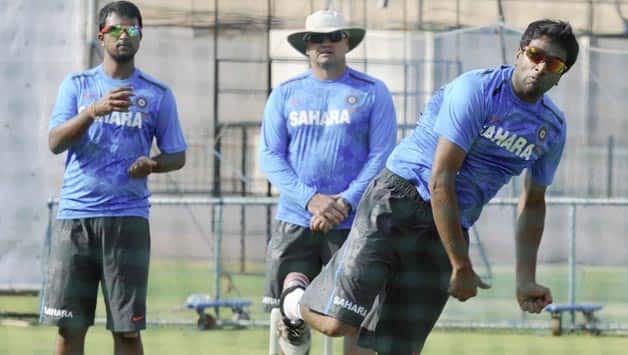 Australian skipper Michael Clarke on Friday reckoned that spin will “again play a big role” in the second Test against India here but was non-committal on whether he would go with an extra spinner or a fast bowler.

He felt the 22-yard strip at the Uppal Stadium was pretty “similar” to the one at Chepauk, where they were thrashed by eight wickets.

“There are a lot of similarities to the Chennai pitch in regards to the wicket. It looks as if it (pitch) was prepared quite early. It’s going to be quite a dry and obviously spin will again play a big part. There will also be up and down bounce. I would be very surprised if India don’t play with three spinners,” Clarke told reporters on the eve of the second Test.

Clarke’s decision to play to his team’s strength backfired in Chennai and probably that’s the reason why the New South Wales man preferred to keep the cards close to his chest.

“Let me have a look at the wicket and then I will sit with the selectors and decide on the XI. I will have to check whether playing an extra spinner will be a better option than playing an extra fast bowler. We want to assess the conditions well and then make sure that we select the best XI,” he said.

Clarke, however, clarified that opener David Warner was fully fit and available for selection.

“You will see him playing again,” he said with a smile.

The stylish right-hander made no bones of the fact that just like the Indian team is comfortable playing in home conditions, the ‘Baggy Greens’ are an equally formidable opposition in their backyard.

“When you come to India, you know that the Indian team will be very comfortable because they play here on a regular basis. It’s the same with the Australian team. We are very comfortable playing in our own backyard.”

“The challenge is to make sure that you perform all over the world. Personally, this tour of India is a huge challenge for me as a captain. We have had a pretty consistent success rate in Australia and we want that to happen on overseas tours as well,” he stated.

Clarke chose to defend Phillip Hughes, who had single digit scores in both innings.

“He got a really awkward delivery in the second innings as it jumped off the rough. He is working very hard just like others in the team. I am confident that our first five or six batsmen can score runs consistently.”

He is undoubtedly the best player of spin bowling in the current Aussie set-up but Clarke believes that each individual has his own way of countering the turning deliveries.

“I don’t expect others to play spin in a manner that I do. I have had success with my approach and there have been times that I failed. The key thing is to have a plan and have courage to stick to it,” he said.

Nathan Lyon went for over 200 runs in the first Test and the skipper was non-committal about whether the offie would get a start or not, provided they again go with single spinner.

“It doesn’t necessarily mean that single spinner would be Lyon. It could be someone else.”

Shane Watson not being able to bowl has also been detrimental to Australia’s team composition and Clarke opined, “It was Watto’s (Watson’s nickname) call of not bowling and not Cricket Australia. I don’t know when he will again start bowling but for me, he is one of the best all-rounders in world cricket. Also, he is good enough to play as a specialist batsman in this Australian line-up,” he said.

The skipper, however, didn’t like the obvious parallel with the England team’s come-from-behind series win.

“We are not the England team. We are a different team. We may have lost the first Test but now our aim is to win the next three Test matches. We need to remain focused. If we can play our best cricket, I am confident of doing well,” he signed off.