Catch Live updates of the first day of the second Test between Australia and India at Brisbane.

Hello and welcome to CricketCountry’s coverage of the first day of the second Test between India and Australia at the Gabba in Brisbane. I am Devarchit Varma, and I will be bringing you the live updates from this match.

Both teams will have a different set of captains for the second Test as compared to the first Test at the Adelaide Oval. The Gabba is unlikely to produce as many runs. In recent years, the Brisbane ground has been known to aid the pace bowlers, though if a batsman is good enough to come to terms with the extra bounce, there are runs to be scored as well. Australia will dearly miss the services of Michael Clarke, who averages 103 at The Gabba after 10 matches. India will once again look to Kohli to score the bulk of the runs, though with Murali Vijay, Cheteshwar Pujara, and Ajinkya Rahane all showing some form the signs are encouraging for India, especially since skipper MS Dhoni is likely to be fit for the match.

Steven Smith will be captaining Australia in this Test match, and till the time Michael Clarke is fit and back to the grill of Test cricket. Till then, it will be the young 25-year-old Smith, who is Australia’s third youngest captain in their history after Ian Craig and Kim Hughes. Ahead of the match, former captain Mark Taylor presented Smith the captain’s jacket.

Australia have not lost a Test at The Gabba since the West Indies trumped them back in 1988, and if India are to get back into this series, they will have to play out of their skins.

There are reports suggesting Umesh Yadav will come in for Mohammed Shami in the Indian playing XI. For Australia, Josh Hazlewood will be making his Test debut and he gets his Baggy Green from Glenn McGrath ahead of the day’s play.

Josh Hazlewood with his family after being presented Baggy Green Cap 440 #AUSvIND pic.twitter.com/YDmcRpdKcA

Three Mitches in one team should make for some interesting on field conversation. #mitchcubed #AUSvIND

TOSS: India opt to bat against Australia.Three changes for India — Umesh Yadav in for Mohammed Shami, Mahendra Singh Dhoni in for Wriddhiman Saha and Ravichandran Ashwin comes in for Karn Sharma.

Had the honour of presenting Josh Hazelwood with his Baggy Green this morning, no. 440 Test cricketer for Australia #AUSvIND

Former Aussie batsman Damien Martyn feels India have made the right call by electing to bat first. Right call or a wrong one, it will actually depend on how India go about their job on the first day with the bat. They will certainly need immense application and lot of courage.

India 1/0 | Overs 1
M Vijay 1 (5), S Dhawan 0 (1)
Mitchell Johnson comes steaming in for the first over of the game and there are signs of good amount of bounce available on the wicket. One run scored through a single on the leg side by Murali Vijay.
India 8/0 | Overs 4
M Vijay 7 (16), S Dhawan 1 (8)
Troubles early on for Shikhar Dhawan as he is beaten twice in the fourth over by the debutant Josh Hazlewood. Vijay, on the other hand is looking positive and is tackling Johnson quite well.
India 21/0 | Overs 7
M Vijay 16 (30), S Dhawan 6 (16)
Mitchell Johnson has been taken off the attack after a short spell of three overs, and Mitchell Starc has replaced him. Positive start by India so far, without much troubles. Dhawan looking a little comfortable now, leaving the balls well.
India 40/0 | Overs 10
M Vijay 25 (34), S Dhawan 15 (26)
Good, positive start by India so far. Australia are using the tactics of giving very short spells to their bowlers. So far four bowlers have had a go — Mitchell Johnson, Mitchell Starc, Josh Hazlewood and Mitchell Marsh. Dhawan and Vijay batting with lot of comfort at the moment.
India 53/0 | Overs 12.1
M Vijay 32 (42), S Dhawan 21 (31)
Vijay and Dhawan have done something extraordinary here! They have put up a 50-run unbeaten stand, which is first for India in Test cricket since the 63-run partnership between Abhinav Mukund and Gautam Gambhir back in the Lord’s Test during that horrifying tour of 2011. Dhawan raises the 50-run stand with a four off Mitchell Johnson.
India 56/1 | Overs 14
M Vijay 32 (43), C Pujara 0 (2)
OUT! India have lost their first wicket as Mitchell Marsh earns his first scalp in Test cricket. Shikhar Dhawan’s poor run continues as he falls after yet another strong stand, failing to get a big one. The ball was outside off, and Dhawan was perhaps beaten by the bounce there.
OUT! S Dhawan c Haddin b M Marsh 24 (39)
India 69/1 | Overs 17
M Vijay 41 (54), C Pujara 6 (12)
Cheteshwar Pujara cracks a four off Mitchell Johnson through a cover drive as India continue to dominate in this session. Vijay is looking very comfortable in the middle.

India 82/1 | Overs 21
M Vijay 45 (65), C Pujara 9 (22)
Some rock solid defence by both Murali Vijay and Cheteshwar Pujara. About 15 minutes more left for the end of the first session, and India would hope that they end it with only one wicket down. Vijay continues to flourish — this time a cracking four over covers.
India 89/1 | Overs 25
M Vijay 46 (75), C Pujara 15 (39)
India will certainly be chuffed up with the way this session has panned out for them. Murali Vijay has played extremely well so far, and so did Shikhar Dhawan till the time the lapse in concentration came in. On the other hand, Australia seem to be trying out new things — only three overs for frontline pacer Mitchell Starc.

Fine session for India as they won it with good batting and having lost only one wicket. Australia and their new captain might be wondering why their bowlers did not thrive as much as they were expected to on this bouncy track at The Gabba. Here’s Shiamak Unwalla’s innings report.

Mitchell Marsh is back in the pavilion after delivering the final ball of the 28th over in the innings. He looked in discomfort in his follow-through.

India off to a very good start.

India 100/1 | Overs 31
M Vijay 54 (92), C Pujara 18 (45)
Positive start from India as they bring up their 100 runs in the 31st over of the day. Mitchell Marsh has gone back to the pavilion as he looked in some discomfort in the middle after delivering the final ball of the 28th over.
India 100/2 | Overs 33.3
M Vijay 54 (98)
Despite the string of errors in the last Test, the umpires don’t seem to have learned from their mistakes. Josh Hazlewood may not consider this as his first Test wicket — he bangs one short, which deflects after hitting Cheteshwar Pujara’s helmet grill and the wicketkeeper takes an easy catch. Virat Kohli walks in.
OUT! C Pujara c Haddin b Hazlewood 18 (64)

Not a great decision that one.

Vijay has left the ball really well in Adelaide and so far in this Test. Think we need to make him play a little more early in his innings.

JUST IN: Mitchell Starc is in distress in the heat out there. He was being attended by Australia team doctor Peter Brukner, and has walked off the field after the drinks break.

India 137/3 | Overs 44.2
M Vijay 72 (136),
Virat Kohli was looking good in the middle but Josh Hazlewood has removed him after a brief stay, right after the drinks break.
OUT! V Kohli c Haddin b Hazlewood 13 (21)
India 146/3 | Overs 49
M Vijay 73 (171), A Rahane 8 (17)
Australia are trying their level best to maintain pressure on India after the wickets of Pujara and Kohli, even though they have lost two bowlers as of yet. Ajinkya Rahane is looking slight shaky, Hazlewood troubled him a lot early on.
India 151/3 | Overs 52
M Vijay 73 (157), A Rahane 13 (25)
Nervous moment for Murali Vijay who ended up giving a chance to Nathan Lyon in the final over. India take tea at 151 for three, but they would be ruing after giving away Australia some advantage. They lost two wickets in the session and scored only 62 runs in it.

Tea at The Gabba, Brisbane on Day One. I’d say a mixed session with Australia still finding no way to get rid of Murali Vijay. Here is the report for second session. We are back after tea and it is Josh Hazlewood who is down, suffering a cramp. India 159/3.

India 180/3 | Overs 56
M Vijay 101 (176), A Rahane 14 (30)
Finally! A century for Murali Vijay, who gets to the three-figure mark with two fours off Shane Watson. He has been absolutely brilliant today, leaving the balls as he always does and scoring off the ones he is very comfortable with. Test century No. 5 for the right-handed India opener.

Congrats vijay for scoring a splendid 100. Keep it up.Continue to stay focus and get a big one. The team requires it. #AUSvIND

NEW BALL HAS BEEN TAKEN.

India 308/4 | Overs 81
A Rahane 78 (136), R Sharma 25 (27)
Australia have taken the second new ball but it is India who are making most of the opportunity. They have brought up their 300 runs on the first day and this effort will give them immense confidence going ahead into the match and the series.
India 311/4 | Overs 83
A Rahane 75 (122), R Sharma 26 (34)
India’s day at The Gabba. For sure. Murali Vijay gridned them down and the weather played it’s part on the hosts as well. Almost all bowlers were struggling today. Ajinkya Rahane and Shikhar Dhawan started off on rusty note, but it was the former who made it count. India will push for a first innings score of 450. Let’s see, how things go tomorrow.

Fantastic effort by Murali Vijay and Ajinkya Rahane, as their efforts have put India on top after Day One. With 311/4 on board, India will fancy a total in excess of 450. Here’s Shiamak Unwalla’s report of the opening day. 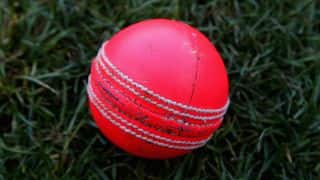