Catch the live updates of the second day's play in second Test between India and Australia at Brisbane.

Hello and welcome to CricketCountry’s live blog of the second day’s play between India and Australia at The Gabba in Brisbane on Thursday. This is Devarchit Varma, and I will be bringing you the updates from the play on Day Two.

India will resume their first innings at 311 for four, with Ajinkya Rahane and Rohit Sharma at the crease. The tourists produced a fine show with the bat on the first day, with Murali Vijay cracking his fourth ton against Australia and overall fifth of his career. On the other hand, Rahane looked as scratchy as Shikhar Dhawan in the start, but consolidated well to notch up the sixth half-century of his career. Catch the highlights of the first day’s play here

For the Australians, it was an ordinary day on the field. Mitchell Johnson did get some bounce and assistance from the pitch but he could not make much difference. Mitchell Starc struggled under the heat, and so did the debutant Josh Hazlewood. Mitchell Marsh suffered soreness in hamstring and walked off the field after getting one wicket, and Australia would certainly be worried over the fitness of their bowlers. Read: Murali Vijay continues to make impressive progress

India would be eyeing anything above the mark of 400 to challenge Australia in their backyard, as they produced a fine show on the first day to make their intentions clear about the comeback in this four-match series, wherein they trail by 48 runs after losing the first Test at the Adelaide Oval. All set for play as the cricketers take field…

Bad light has stopped play at The Gabba. And it has been confirmed that will be all for today.

Australia 221/4 | Overs 52
S Smith 65 (88), M Marsh 7 (22)
Bad light has forced players to go off the field, and this will be all for today. Australia are 187 runs behind India’s total in first innings and they will need one or two big partnerships in the middle to thwart India’s threat.
Australia 218/4 | Overs 51
S Smith 63 (84), M Marsh 6 (20)
Mitchell Marsh has joined his captain out there in the middle. Good for Australia as Mitchell had walked off the field after soreness in the hamstring. India attacking with R Ashwin and Umesh yadav at the moment.
Australia 208/4 | Overs 47
S Smith 59 (79),
After that embarassing drop in the last over, India would be kicking themselves for not getting another wicket. But nevertheless, Umesh Yadav has ticked all boxes right today and continues to do so. Here, he gets Shaun Marsh caught by R Ashwin for 32.
OUT! S Marsh c Ashwin b Umesh 32 (70)
Australia 198/3 | Overs 44
S Smith 50 (68), S Marsh 30 (64)
Steven Smith completes his first half-century as Australia captain, his effort is applauded by the crowd at The Gabba.
Australia 186/3 | Overs 41
S Smith 43 (62), S Marsh 27 (53)
Steven Smith is looking in fanstatic touch as he has raced to 43 not out with four boundaries and two massive sixes off R Ashwin. He has now added 65 runs with Marsh.

And this is how Shikhar Dhawan celebrated the wicket of Shane Watson after taking a fine low catch.

Australia 145/3 | Overs 33
S Smith 20 (36), S Marsh 10 (30)
Shaun Marsh has so far looked at ease in the middle and so has Steven Smith. Australia need a big partnership and their new captain would be highly motivated to score few runs here. Ishant and Ashwin bowling in tandem for India.

Something for the Indian fans to cheer about…

Australia 126/3 | Overs 28
S Smith 8 (24), S Marsh 3 (6)
Play has resumed after the tea break and India would be looking to continue making inroads in this Australian line-up.

Australia have given India a bit of opening with three wickets. Shaun Marsh is likely to join Steven Smith when play resumes post tea, and it will be a big challenge for him. He had a torrid time when India toured last time around. Here’s the second session report.

Australia 121/3 | Overs 24.5
S Smith 6 (17)
Umesh Yadav has taken his second wicket as Chris Rogers’ resistance is finally ended. India stuck to continue bowling short and this time Rogers failed to keep one down that came sharply on him. MS Dhoni takes a fine catch. Time for the tea break.
OUT! C Rogers c Dhoni b U Yadav 55 (79)
Australia 115/2 | Overs 20
C Rogers 52 (75), S Smith 4 (4)
Half-century for Chris Rogers as he has been Australia’s best batsman so far in this innings. He brings up the fifty off 75 balls and 10 boundaries. Fine effort, also completes 1,200 runs in Test cricket.

Shane Watson has one score of 50 in the last 11 Test innings,not in the pink of batting” health,as I see it — shishir hattangadi (@shishhattangadi) December 18, 2014

Australia 98/2 | Overs 20
C Rogers 39 (65), S Smith 0 (2)
Another failure for Shane Watson in this series as R Ashwin has removed him after a brief stay at the crease. India get their second wicket. Looking to charge, Watson ended up giving a catch to the Indian fielder at mid-on.
OUT! S Watson c Dhawan b Ashwin 25 (29)
Australia 98/1 | Overs 19
C Rogers 39 (65), S Watson 25 (25)
Chris Rogers is battling to remain in the side and he has done great deal of work in this innings to ensure that. India looking a little desperate now to get wickets.
Australia 75/1 | Overs 15
C Rogers 25 (48), S Watson 17 (18)
MS Dhoni came really close to the batsman’s end and told Ishant Sharma in Hindi to not worry about anything else and bowl the line that he wants to. Both Rogers and Watson have done well to survive as the Indians are attacking at the moment.
Australia 47/1 | Overs 8.3
C Rogers 16 (25),
Umesh Yadav bowled it back of length and David Warner did not get enough room to play that. He got top edge and R Ashwin took a simple catch at first slip. India draw the first blood!
OUT! Warner c Ashwin b U Yadav 29 (28)
Australia 27/0 | Overs 5
C Rogers 4 (15), D Warner 21 (19)
Ishant Sharma is bowling a little too full from either sides of the wicket and David Warner is cashing in on the deliveries to score off. He has already hit five fours now.
Australia 6/0 | Overs 2
C Rogers 4 (8), D Warner 1 (5)
Ishant starts proceedings for India, Rogers on strike. Good start, dot ball to start with. Ishant getting a bit of movement here. That’s four through cover off the last ball, not quite off the middle of the bat though. Varun Aaron opens the bowling at the other end. Just a run off that over. Good start from India so far.

Different day, but familiar collapse by India. Thanks to Mahendra Singh Dhoni and Ravichandran Ashwin, who added 57 runs to take India past 400 otherwise the tail would never have fought on this wicket. Josh Hazlewood registers five-for on debut, and he will be delighted to have achieved the feat. The players take lunch and here’s Shiamak Unwalla’s session report.

India 408 | Overs 109.4
I Sharma 1 (3)
The last man is dismissed as India have been bowled out for 408 on the second day. It’s been Australia’s session as they fought back to take six more wickets and not let India dominate. Full marks to Josh Hazlewood, who put behind the troubles on the first day and came out strong to take five wickets on debut.
OUT! U Yadav c Chris Rogers b Lyon 9 (21)
India 407/9 | Overs 108
U Yadav 9 (14)
Fine catch by the substitute fielder at short-leg as Nathan Lyon gets his third wicket in the innings, in form of Varun Aaron. India have really lost wickets in a heap today.
OUT! Aaron c (sub)Marnus b Lyon 4(11)
India 394/8 | Overs 104.2
U Yadav 0 (3)
There it is!!! Josh Hazlewood bags his fifth wicket on debut and Brad Haddin takes the sixth catch in the innings, as they team up together to get rid of the Indian captain MS Dhoni.
OUT! Dhoni c Haddin b Hazlewood 33 (53)

India 385/7 | Overs 102.3
MS Dhoni 24 (45),
A fine innings by Ravichandran Ashwin comes to an end as Josh Hazelwood gets him caught at the first slip. Ashwin may have come after Dhoni, but he zipped past him with a fluent 37-run knock that was studded with six fours.
OUT! R Ashwin c Watson b Hazlewood 35 (41)
India 373/6 | Overs 99
MS Dhoni 22 (35), R Ashwin 25 (30)
MS Dhoni and R Ashwin have not only steadied the Indian innings but have also led their charge towards the 400-run mark. Their partnership is of 45 runs now. India would like these two to take them through to the end of the first session. India have scored 62 runs in 15 overs so far today with the loss of two wickets.
India 348/6 | Overs 95
MS Dhoni 17 (29), R Ashwin 7 (16)
Ravichandran Ashwin is in at No. 8 and he is looking pretty neat in the middle. Ends Mitchell Johnson’s spell with a confident backfoot punch for three, as his partner MS Dhoni pulls and then hits a straight drive to keep India going.
India 328/6 | Overs 91.2
MS Dhoni 5 (19)
Big wicket! Shane Watson comes in as the first change this morning and gets the key wicket of Rohit Sharma, who got lured into driving a ball way outside the off-stump. India have lost two wickets in since morning with both overnight batsmen back in the pavilion. Steven Smith takes a superb catch to get rid of the Indian batsman, who once again squanders an opportunity.
OUT! ! Rohit c S Smith b Watson 32 (55)

Rahane’s catch was Brad Haddin’s fifth in the innings. He has been involved in all dismissals this innings — http://t.co/TuDDJCPCbS — CricketCountry (@cricket_country) December 18, 2014

India 312/5 | Overs 85.4
R Sharma 30 (40)
After a fine cover drive for four, Ajinkya Rahane is caught behind for 81 as Josh Hazlewood provided Australia the much-needed breakthrough early on the second day!
OUT! A Rahane c Haddin b Hazlewood 81(132)
India 312/4 | Overs 84
A Rahane 76 (124), R Sharma 26 (38)
Josh Hazlewood starts the proceedings on what is expected to be another hot and humid day in Brisbane. India add one run in the first over with Ajinkya Rahane taking a single.

Just been out on the ground. Another scorcher. Storm expected at 1500 local time, 1030 India time. 95% chance according to weather bureau — Harsha Bhogle (@bhogleharsha) December 17, 2014 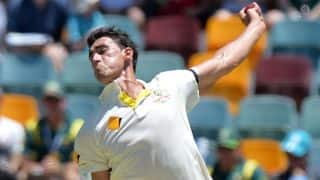 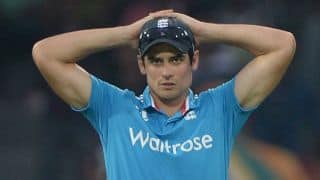