Sunil Gavaskar feels that India did not capitalise on the good start they made on Day 1.

Batting great Sunil Gavaskar today felt India squandered another opportunity to be in a commanding position after being bowled out for 408 on day two of the second cricket Test against Australia in Brisbane today. India, resuming the day on 311 for four, could only add 97 runs to their first innings. In reply, Australia were 221 for four and trailed by 187 runs before play was called off earlier than scheduled time owing to bad light.

“The honours are even [after day two]. In fact I would like to say India have a slight edge going into day three. It was good India got rid of Shaun Marsh before stumps. Now they must try to wrap up Australia by lunch tomorrow,” Gavaskar told NDTV.

Talking about India’s batting in the morning, Gavaskar said: “It was a little disappointing that Rohit [Sharma] got out after getting a start. I was hoping India would get 450 plus. That way they would have got got a 150-170 run lead if they bowled out Australia for 300. At one stage even 400 looked tough but Ashwin and Dhoni had a good partnership.”

Ashwin (35) and India captain Dhoni (33) forged a 57-run stand for the seventh wicket, helping the team get past 400. Dhoni took a couple of blows on his body during his 53-ball innings. Gavaskar was all praise for the “brave” skipper. “He is a strong man. He showed it today that nothing fazes him and he is not afraid of taking blows on his body.”

Australia once again scored at a brisk pace, maintaining a run-rate of 4.25 runs per over. Gavaskar felt Indian bowlers should have bowled better though he was impressed with speedster Umesh Yadav (3/48). “Yadav bowled really well, maintained a good line and length and looked like taking wickets,” he said.

Pacer Varun Aaron continued to leak runs, conceding 59 in 12 overs at 4.91 runs per over. Though he was a tad unlucky today, Gavaskar said Aaron needs to tighten up his bowling. “He is there in the side to bowl fast, which he is doing. But he has this tendency to leak runs. He tends to bowl full a lot and therefore goes for big runs. I think the field placings can be tweaked when he is bowling. If the men at mid-off and mid-on are straighter, it might save some runs. “The Indian fast bowlers are bowling at the same pace as Australians, they just need to focus more on the line and length,” added Gavaskar. 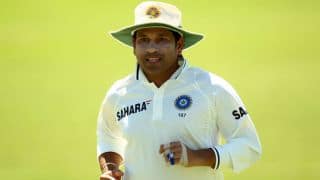 Sachin Tendulkar satisfied with India's progress in other sports