India vs Australia 2014-15 2nd Test at Brisbane: MS Dhoni admits there was unrest in dressing room

India vs Australia 2014-15 2nd Test at Brisbane: MS Dhoni admits there was unrest in dressing room

Kohli was informed that he had to bat ahead of Dhawan less than seven minutes before start of play.

All is not well in the Indian dressing room right now with skipper Mahendra Singh Dhoni revealing that there was some “unrest” resulting from “lack of communication” with the in-form Virat Kohli before today’s batting collapse in the lost second cricket Test against Australia here.

India lost the match by four wickets after being bowled out for a mere 224 in their second innings which left a paltry target of 128 for Australia to chase.

The drama inside the dressing room was triggered by overnight unbeaten batsman Shikhar Dhawan injuring his elbow during a practice session but revealing the extent of discomfort just before the day’s play was to start.

The Indians had to send Virat Kohli ahead of him but the batsman was informed of the change less than seven minutes before the visitors took the field.

“The first session today was a big debacle for us. There was a lack of communication in our dressing room over whether Shikhar will go into bat or Virat. We did not handle that situation well,” Dhoni said at the post-match presentation.

“We were having a bat at the nets, the wickets were not very good and he (Shikhar) got hit. He didn’t react too badly at that time so we thought he was fine to bat. But by the time he came in, he was in a lot of pain and unable to bat. We were only able to give Virat 5-7 minutes to prepare and that created some unrest in the dressing room,” he revealed.

At a loss of words to explain his team’s shambolic performance, given that it lost the match with more than a day to spare, Dhoni praised the opposition.

“I think Mitchell (Johnson) batted really well. Once you get close to the new ball, the ball goes soft and the bowlers get tired. He played his shots and he was a little lucky too.

Nothing went to the fielders and he was able to score. It was one of those days when nothing went right for us,” Dhoni said about the third day’s play during which Johnson played a key role for Australia with an 88-run knock. 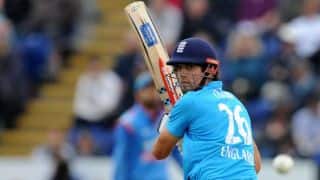