India vs Australia 2014-15, 3rd Test at Melbourne: India to fight for survival

India vs Australia 2014-15, 3rd Test at Melbourne: India to fight for survival

Australia enjoyed a light training session before the entire squad retired to a Christmas lunch.

Stung by two successive defeats and hit by a dressing room unrest, India go into the must-win third cricket Test against Australia here tomorrow seeking to salvage a tour which seems to be falling apart both on and off the field.

With a 2-0 lead in hand, Australia need merely a draw to regain the Border-Gavaskar Trophy while India have to win both the remaining two Tests to hold on to the trophy.

The trophy aside, India would be looking to avoid yet another overseas Test-series loss, a situation which is familiar territory for Mahendra Singh Dhoni‘s men.

The hosts won by 48 runs in Adelaide and by four wickets in Brisbane and can win back the Border-Gavaskar Trophy here at the Melbourne Cricket Ground (MCG).

Stretching back to England in 2011-12, India have lost their last five overseas Test series without exception. The last time this happened was when they were minnows and had just started playing Test cricket.

They lost six consecutive overseas Test series starting from their inaugural tour to England in 1932 until the first West Indies tour in 1953, a run spanning defeats in 12 Tests out of 21 played.

But a lot has changed for Indian cricket since. They are not the lowly ranked new-comers in this sport anymore. They are the alpha male of cricket, dominating the game outside the boundary ropes.

It is only to be expected then that they should go on to perform equally well on the field, irrespective of conditions. Yet, results haven’t matched expectations for the past four seasons.

During this time, the golden generation of the past two decades has either retired or been brushed aside, and the transition got underway. Even that latter bit is coming to an end now, as the Indian team prepares to play the last two of their consecutive run of overseas Tests in a calendar year.

From South Africa to New Zealand to England, it has been a steep learning curve with important lessons at every stage.

The team management has proclaimed many times that they have been assimilated as part of the process. Apart from the Lord’s win, the outcome hasn’t changed much.

Landing in Australia then, the Indian team tried something different, raising their aggression on the pitch. For the first three days of this series, in respect to late Phillip Hughes, emotion tided over proceedings.

On the Australian side, David Warner and Mitchell Johnson came up with curt replies, and got the upper hand of this mini-battle as they helped their side to consecutive Test victories.

India will be looking to dial down their aggressive intent when they take the field on Boxing Day, or at least not exhibit too much, instead concentrating on the job at hand. It will be a boisterous capacity crowd that will attend at least the first day of this Test.

Anything untoward has the potential to become a major draw for the loud support the home team will garner here. Ever since complaints about poor practice pitches and lack of proper food came out of Brisbane, the touring squad has become a subject of ridicule. They need proper performances on the field to lift them out of this rut.

The visitors will need their in-form batsmen, Vijay and Kohli, to fire and score big runs. They will also need Cheteshwar Pujara and Ajinkya Rahane to start converting their starts.

Even so, the management will have to address key questions. They will have to consider Dhawan’s poor run opening the innings, never mind the half-century he scored in the second innings at the Gabba. Will that be enough to retain him or should newcomer KL Rahul be given a chance?

More importantly, will Rohit get yet another opportunity? His scores of 43, 6, 32 and 0 haven’t done any justice to the long rope that skipper Dhoni spoke of with regards to the talented batsman.

He missed out when India opted to play five bowlers in England and it will be so should they choose to go this route again. The other option is to play Suresh Raina instead who also bowls useful spin, perhaps more consistently than Rohit.

All permutations and combinations are possible going into the Test and this could be gauged from the practice session on Thursday.

Rahul batted and fielded at short leg as debutants usually do, Raina batted ahead of Rohit in the nets and took some catching practice while the latter skipped fielding sessions.

Among the bowlers, Ishant, Umesh Yadav, Mohammed Shami and Varun Aaron enjoyed an easy day. If there is one confirmation, then Bhuvneshwar Kumar, although fit and back to bowling again, will not be risked in this match.

On the other hand, Australia enjoyed a light training session before the entire squad retired to a Christmas lunch also attended by their families.

It was representative of the calm state of mind the hosts take into this third Test, standing on the cusp of winning the series. If at all, they will be concerned about the state of Warner’s thumb and Shaun Marsh‘s left hand, both recovering from major hits recently.

Yet, the Australian playing eleven has been announced as per routine, with no surprises as both the left-handed batsmen made the cut.

Also, Joe Burns will make his debut at number six in place of the injured Mitchell Marsh while Ryan Harris is back in the side taking Mitchell Starc‘s place. Out-of-form Shane Watson and Brad Haddin too retained their spots as expected. 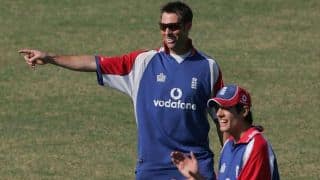