India vs Australia 2014-15, 3rd Test in Melbourne, Preview: Pressure on tourists ahead of iconic Boxing Da

Australia have a settled line-up and there are only two changes to the side that beat India in the second Test.

India and Australia will take on each other the iconic Melbourne Cricket Ground (MCG) in the third Test, starting Friday. This is the Boxing Day Test, one of the most eagerly anticipated cricketing  fixtures every year. India last won in Melbourne in 1981 and in their last five visits, they have been beaten on all occasions. Given the way Australia have played this series, India are under pressure and face an uphill if not impossible task of bouncing back in this contest.

There have been conflicting viewpoints from some of the former players. While Ricky Ponting believes that this is India’s best chance of winning a Test in Australia this season, Matthew Hayden feels Australia will sail through. In fact there is all that talk about the supposed rift between Virat Kohli and Shikhar Dhawan. MS Dhoni has gone on record to say that those reports are nothing but stories. Thus, there is a very interesting build-up to this game with Australia starting as firm favourites.

India may mull a few changes to their batting line-up. Rohit Sharma has come under fire for his performance so far and there is a possibility of him being replaced. India could consider Naman Ojha or Suresh Raina. KL Rahul, the back-up opener could also be an option. Wriddhiman Saha could also be considered in a pure batting role. The rest of the line-up should remain the same with Murali Vijay, Dhawan, Kohli, Ajinkya Rahane, Cheteshwar Pujara and Dhoni forming the core of the batting.

Ravindra Jadeja has been ruled out of the last two Tests and has been replaced by Akshar Patel. It is unlikely that India will play five bowlers with Jadeja out as that may leave their batting too weak. Ravichandran Ashwin may continue as the lone spinner in the side. In the fast bowling, India have been bolstered by the return of Bhuvneshwar Kumar. Ishant Sharma will hold on to his spot with a tussle between Umesh Yadav and Varun Aaron for the third seamer’s role.

Australia have a settled line-up and there are only two changes to the side that beat India in the second Test in Brisbane. Joe Burns walks in place of the injured Mitchell Marsh and has been announced as the No. 6 batsman. The great news for Australia is that Ryan Harris also comes back into the side with Mitchell Starc making way. Shane Watson and Shaun Marsh have been declared fit and so has David Warner, who was carrying an injured thumb.

Chris Rogers bounced back in the last Test with a couple of fifties and will want to bring that form into this game. Warner remains a major threat at the top with skipper Steven Smith playing the sheet anchor role at No. 4. If there is any worry, it is Watson, who has had a tough run in Test cricket in recent times. The pressure is on him to convert those attractive 20s and 30s into big ones.

Mitchell Johnson will lead Australia’s pace bowling department, intending on intimidation. Harris brings in the extra punch with the youngster Josh Hazlewood excelling on debut. Nathan Lyon will be the lone spinner in the side.

Australia will walk out at Melbourne with confidence and momentum. India have to produce the goods. They have to vindicate Ponting’s assessment and challenge Hayden’s opinion. 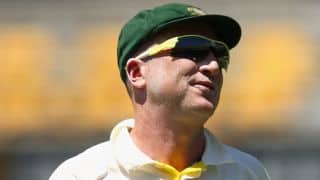