Australia are now 482 for eight.

Steven Smith and Ryan Harris have put up a 100-run stand for the eighth wicket on Day Two of the third Test against India in Melbourne. Harris has been dismissed for 74 though as he first hit a six down the ground and was then dismissed leg-before by Ravichandran Ashwin. This has been a fruitful partnership for them.

Australia have taken command of this game after starting the day on 259 for five. Steven Smith is past his 150 and is piling on the runs as the Indians appear clueless. 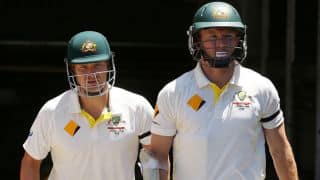