Smith has been dismissed under 20 for the first time in the series.

Steven Smith has been dismissed for 14. He was caught by leg-slip off the bowling of Umesh Yadav. Australia are leading by 200 runs on Day Four of the third Test against India. They are now three down with Chris Rogers still in the middle, and he has scored his fifty already. Shaun Marsh is the new man.

Smith has been dismissed under 20 for the first time in this series. He has played extremely well through the series having scored three tons. India have got a huge task on their hands as they want to go on to challenge Australia. However, the hosts have kept them at bay with some spirited performances. 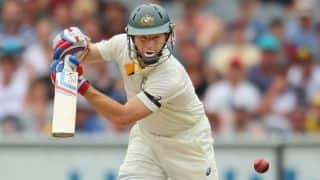