Steven Smith has got his highest Test score during Day Two of the third Test between India and Australia in Melbourne. He smashed a six down the ground to move to 168. Smith is playing his second Test as captain and has scored tons in both.

Smith has been in tremendous form. This is his seventh Test ton, third in this series and fifth in 2014. That shows a rich vein of form and that he is one of the best batsmen going around currently. Australia have also gone past 500. 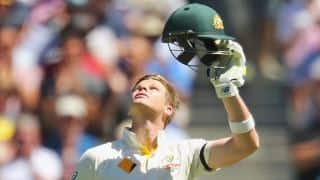