Australia have declared their second innings ahead of Day Five of the fourth Test against India in Sydney. Australia ended Day Four on 251 for six, and that put them 348 runs ahead of India. Now that they have declared overnight, India will try to chase 349 in the allotted 90 overs. It would not be an easy task as the wicket is turning and Nathan Lyon will come into play.

This match could have a similarity with Adelaide, where India had tried to chase a huge total on the last day. However, wickets in the final session cost them dearly and Virat Kohli was left dejected. If India are to chase a score down here, undoubtedly, Kohli is the key batsman for India. He will have to take charge and try to go for it. However, the surface in Sydney is wearing and it will not be an easy task to bat it out.

India have a few batsmen in good form though. Murali Vijay has been one man who has stood out. He will however want to make amends from his first innings duck. Then there is KL Rahul who scored a ton in the first essay. Kohli and Ajinkya Rahane are the other men in the middle who also are in a good run of form. 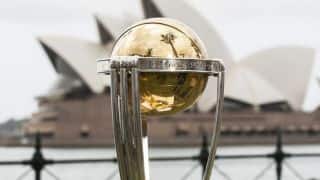